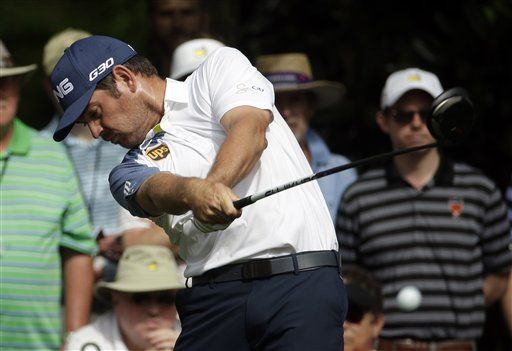 Jordan Spieth is 10-under par at the Masters. And it’s not even lunchtime Friday.

The 21-year-old Texan stretched his lead to five strokes with an 18-foot birdie putt at the fifth hole. He also birdied the par-5 second after coming up just short of the green with his approach, then chipping up next to the flag for a short birdie putt.

Just as important, Spieth is making all the testy, par-saving putts that can ruin your day at Augusta National. A 4-footer at No. 1. A 6-footer at the third. A 3-footer at the fourth.

Tiger Woods started his day with a birdie at the first, getting back to even par for the tournament.

But he’s still a staggering 10 shots off the lead.

Former British Open champion Louis Oosthuizen is making a move early in the second round at the Masters.

Oosthuizen, who lost in a playoff to Bubba Watson three years ago, birdied the first two holes Friday and added another birdie at No. 5, pushing his score to 3 under for the day and the tournament.

He is now five strokes behind leader Jordan Spieth, who just teed off and made par on the first hole.

Ernie Els has slipped back to 5 under with a bogey at the par-3 fourth. The Big Easy is tied for second, three shots back, with Jason Day, Justin Rose and Charley Hoffman. Sergio Garcia and Russell Henley are both 4 under.

Ernie Els has already cut into Jordan Spieth’s lead at the Masters, making a birdie at the second hole to pull within two strokes of the top spot.

On an overcast morning at Augusta National, the South African started play Friday with possible storms in the forecast.

Jordan Spieth tees off in just before 10 a.m. EDT.

Spieth is loosening up in the practice area after opening Thursday with an 8-under 67, which gave him a three-stroke lead on Els, Justin Rose, Jason Day and Charley Hoffman.

Day and Hoffman also have morning tee times. Rose goes off in the early afternoon.

Tiger Woods, nine shots back a 1 over, begins his second round at 10:30. He’s trying to avoid missing the Masters cut for the first time in his pro career. 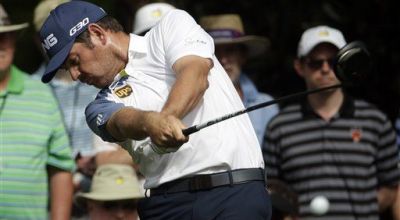