Spieth goes to final round of Masters with 4-stroke lead 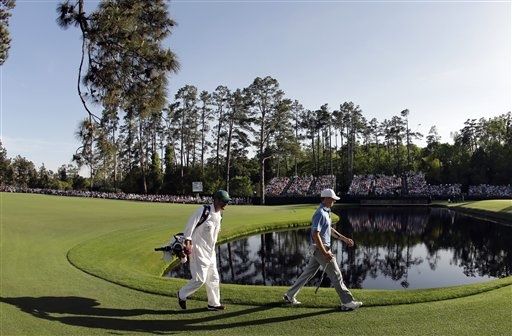 For the second year in a row, Jordan Spieth will be playing in the final group at the Masters on Sunday.

Only now, it will be a big surprise if he doesn’t leave with a green jacket.

Spieth has already set Augusta National scoring records for 36 and 54 holes. He joined Tiger Woods as the only players to reach 18-under par at the venerable course. If not for a double bogey at the next-to-last hole Saturday, he would have gone to the final round needing only to avoid an epic collapse.

He’ll have to work a little harder now, but he’s still the clear favorite with a 16-under 200 providing a four-stroke edge over Justin Rose, a five-shot lead over Phil Mickelson, and only one other player within single digits of the lead.

Plus, Spieth has been here before. Just a year ago, in his Masters debut, he had a two-stroke lead with 11 holes to play before Bubba Watson rallied.

“I think the good thing for him is he’s already experienced it once,” said Rory McIlroy, who will begin the final round 10 shots behind. “He’s played in the final group at the Masters before. It didn’t quite happen for him last year, but I think he’ll have learned from that experience.”

Spieth starts the last leg of this dominant week with Rose. Right ahead of them will be Mickelson, one of the most popular figures at Augusta, playing with Charley Hoffman (six shots back). McIlroy and Woods will be ahead of them, both 10 shots down.

“There’s going to be roars,” Spieth said. “Phil is going to have a lot of roars in front. A few groups up I think is Tiger and Rory … well, you’re going to hear something. It’s about just throwing those out of my mind, not worrying about it, not caring, setting a goal and being patient with the opportunities that are going to come my way.”

Spieth got a glimpse of how quickly things can change Saturday.

A birdie at the 16th gave him a commanding seven-shot lead, his biggest yet, but he unwisely went with a driver at the next hole and put it in the trees. He also flubbed a chip, then three-putted.

His gutsy short game saved him in the end. Spieth hit a flop shot from a tight lie to 10 feet and made the par putt for a 2-under 70. That steadied the 21-year-old Texan going into a final round that no longer looks like a runaway.

Some things to watch for in the final round of the Masters:

RECORD BOOK: Spieth already set Masters records for the lowest 36- and 54-hole scores. He’s got a shot at a few more marks on Sunday: lowest overall score at the Masters (Tiger Woods’ 18-under 270 in 1997) and lowest score in relation to par at any major championship (Woods’ 19 under at the 2000 British Open).

MAJOR LEFTY: Say this about Mickelson: He knows how to play his best golf when it matters most. During a disappointing 2014 season, he suddenly popped up to contend at the PGA Championship. He hasn’t done much this season, but he sure pulled it together at the Masters. Of the top four going to Sunday, he clearly has the most experience when it comes to playing meaningful golf on the biggest stages, having won five major titles and contending numerous other times.

STRONG FINISHER: If Rose can figure out a way to get off to a better start, he might have a good shot to win his second major championship. He started poorly both Friday (3 over through four holes) and Saturday (2 over through five) but bounced back to shoot 70 and 67. He made birdies on five of the last six holes Saturday.

TIGER TALES: Woods is probably too far back to win his fifth green jacket, but he’ll be looking for a strong finish to leave with good vibes from this week. He shot a 68 on Saturday to break a streak of 18 consecutive rounds in the majors without breaking 70 on the weekend. He even provided one of his customary fist pumps when he pulled off an improbable birdie at the 13th hole, after he yanked his drive alongside a creek and unleashed a curse word.

HOFFMAN HANGS AROUND: Hand it to Charley Hoffman. The 38-year-old journeyman, playing in only his second Masters, broke par for the third straight day (71) and still has an outside shot heading to the final round.