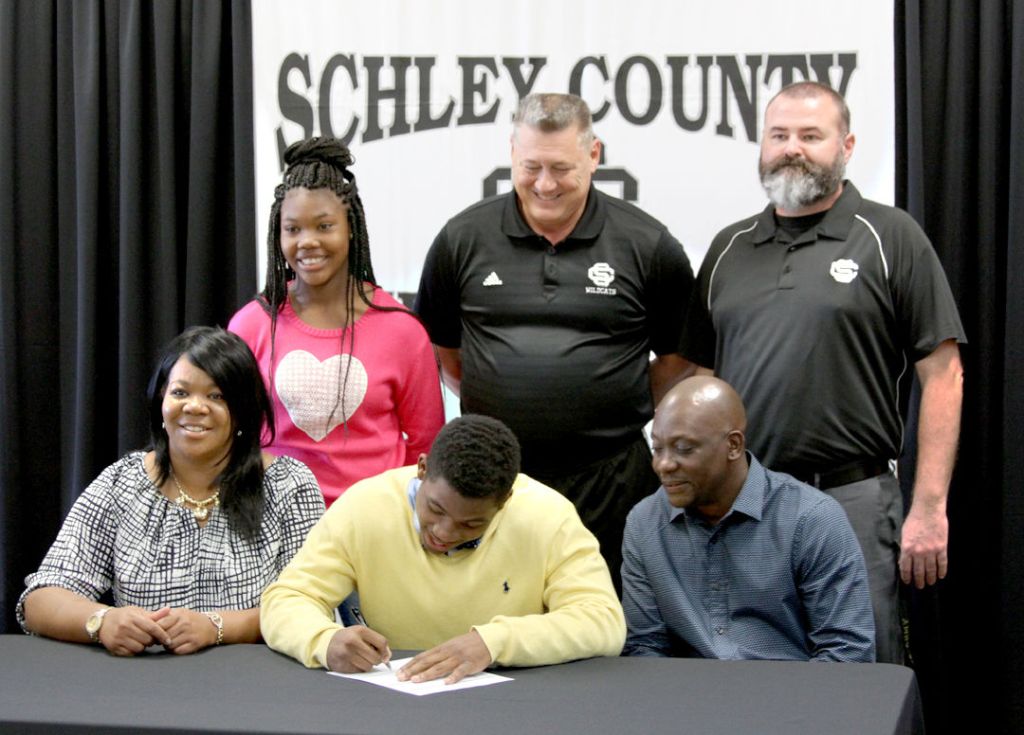 ELLAVILLE – Schley County High School held a signing ceremony on April 3 for one of the school’s very talented seniors, Tra Minter. During the ceremony, Minter signed a letter of intent on to attend Garden City Community College in Garden City, Kansas. He will begin his college career in the fall of 2015 and will be playing football for the Garden City Broncbusters.

Minter is a native of Ellaville and has lived in Schley County his entire life. He has been playing football for nearly ten years.

Minter spoke with the Times-Recorder after the signing, saying “I’ve loved football since I played in the recreation league. I admire the game and love everything about it. I’ve set a lot of goals for myself and I am not finished yet.”

During his high school career, the talented young athlete has been a valuable member of the Wildcats’ football team, basketball team, and track team.

Minter began to show his talents on the football field in the beginning of his high school career. Though he narrowly missed being named to the All-State team during his freshman year for his performance on the gridiron, he did receive the Freshman Award. He was also was named Two-Way Player Region 4-A for playing offense and defense and was named First-Team running back during his first season with the Wildcats.

In his sophomore year, Minter was once again named First-Team running back. He gained over 1,600 rushing yards and 1,200 receiving yards on the field during this season and played the linebacker position as well as running back, gaining over 50 tackles.

In his junior year with the Wildcats, Minter rushed 1,591 yards and was named to the All-State team yards despite an ankle injury.

He returned to the field with a vengeance in his senior year, and was named First-Team All-State running back. He was honored as the number-one running back in the state over all classifications with 2,456 yards rushing. In the linebacker position, he gained 106 tackles during his final high-school season.

Minter told the Times-Recorder, “I chose to attend Garden City Community College because they have a very good football program. They help their players enhance their skills on the field and a lot of their players move on to Division I schools. Many of their players have gone on to play in the NFL. This is part of the reason that I chose to go to a junior college before transferring to a larger school.”

Minter hopes to enter the NFL draft after college.

Minter says that he is looking forward to working towards his goals in college and doing the best he can both on the field and in the classroom.

Schley County head football coach Mark Daniels spoke with the Times-Recorder, stating “Tra is a fine young man and it has been a privilege to coach him. He’s dependable and will do whatever is asked of him. The thing is, for being so talented, he doesn’t act arrogant. He is always respectful of all of his teammates. He is one of those guys that makes the whole team better, not just because of what he can do on the field, but because he brings chemistry to the whole program. He’s one of the strongest guys in the weightroom because he’s always in there lifting. He is a good citizen and athlete. I think he will do really well.”

Column: Go ahead and measure the kid for a…