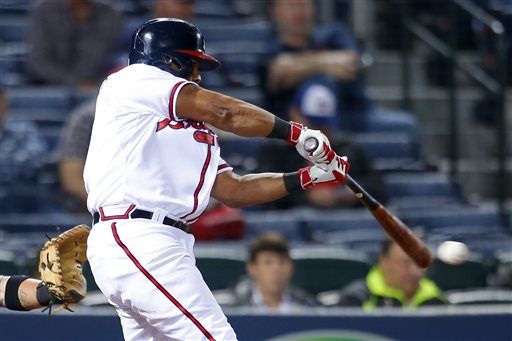 ATLANTA (AP) — Instead of waiting for home runs, the Braves are finding different ways to manufacture runs — and win games.

Alberto Callaspo hit a tiebreaking single in Atlanta’s two-run fifth inning and the Braves held off Miami in the ninth to beat the Marlins 3-2 on Monday night in a game slowed by two rain delays.

A single by pinch-hitter Jace Peterson and double by Eric Young Jr. knocked Marlins starter Matt Latos (0-2) out of the game in the fifth. Callaspo hit Sam Dyson’s first pitch to center field to drive in Peterson for a 2-1 lead. Nick Markakis followed with another run-scoring single.

“When you get contributions from everybody on the roster, whether they start the game or not, it’s going to make for a special team and a very fun summer,” Young said.

The Braves have hit only four homers in seven games.

Shelby Miller (1-0) allowed one run in five innings as the Braves bounced back from their first loss.

The Marlins suffered their sixth loss in seven games.

“We’re going through a funk as a team, and we’ve got to dig deep and figure out a way to get something going,” Marlins manager Mike Redmond said.

Before the game, the Marlins placed opening-day starter Henderson Alvarez on the 15-day disabled list with inflammation in his right shoulder and elbow.

Jason Grilli gave up a double to Martin Prado to open the ninth before striking out Michael Morse and Marcell Ozuna. After walking Jarrod Saltalamacchia, Grilli gave up a run-scoring single to Adeiny Hechavarria. Grilli struck out Jeff Baker on a called third strike to earn his fourth save.

The start of the game was delayed 52 minutes by rain. There was another delay of 39 minutes in the middle of the fourth.

Miller helped Atlanta’s bullpen by returning for another inning following the fourth-inning delay.

“That was a big inning, another inning the bullpen didn’t have to give up,” Braves manager Fredi Gonzalez said.

The Braves pulled even in the fourth with Christian Bethancourt singled, stole second, advanced to third on Saltalamacchia’s throwing error and scored on a wild pitch from Latos.

Yelich took a run-scoring hit away from Cameron Maybin in the second. With runners on first and second, Yelich made a leaping catch of Maybin’s line drive in left field and held the ball as he tumbled onto the warning track. A video review confirmed the catch.

Before the game, the Braves designated right-hander Juan Jaime for assignment and selected the contract of right-hander Sugar Ray Marimon from Triple-A Gwinnett. Jaime walked four while getting four outs in his first two games.

Gonzalez said the move was made because “you need somebody in the game who throws strikes.”

Marlins: RHP Tom Koehler will look for his first win against Atlanta on Tuesday night. Koehler is 0-3 with a 3.13 ERA in 10 games, including seven starts, against the Braves.

Braves: RHP Trevor Cahill, acquired from Arizona on April 3, will make his Braves debut. The Braves need Cahill to provide depth and stability to a rotation that has lost Mike Minor indefinitely with a sore shoulder.