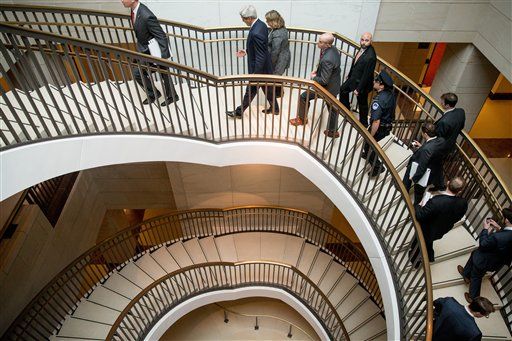 Secretary of State John Kerry, center, departs an all Senators briefing on Iran nuclear negotiations, Tuesday, April 14, 2015, on Capitol Hill in Washington. Republican and Democrats on the Senate Foreign Relations Committee reached a compromise Tuesday on a bill that would give Congress a say on an emerging deal to curb Iran’s nuclear program. Kerry, who played a leading role in getting a framework agreement with Iran last month, personally pleaded with House Republicans and Democrats on Monday to give the Obama administration more time and room to negotiate a final deal. Kerry also met in a closed-door session with members of the House on Tuesday before the committee debates the bill. (AP Photo/Andrew Harnik)