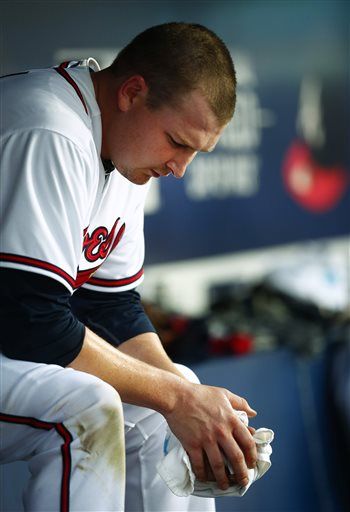 ATLANTA (AP) — Braves manager Fredi Gonzalez believes Trevor Cahill will pitch better during his next turn in the rotation.

“I’m going to chalk it up to he hasn’t pitched in a while,” Gonzalez said. “He hasn’t seen live hitters. His stuff wasn’t — when a sinker baller is giving up fly balls, that’s not a good sign.”

Cahill didn’t make it through the third inning of his Atlanta debut as Giancarlo Stanton and the Miami Marlins beat the Braves 8-2 on Tuesday night.

Stanton broke out of a slump with three hits and four RBIs. Dee Gordon and Ichiro Suzuki each scored two runs for Miami, which beat Atlanta for the first time in five tries this season.

Stanton, who signed a record 13-year, $325 million contract in November, began the game hitting just .130 with three RBIs in 23 at-bats. But he was dialed in against the Braves.

It marked the fourth time that he’s reached five times safely in the same game and marked the first time since last April 18 that he didn’t record an out in at least five plate appearances.

Also, in his last at-bat, for the first time this season, he didn’t wear the face guard on his helmet that he has used since spring training to protect his face, which was fractured when he was hit by a pitch in September, ending his season. He was facing a left-hander, Andrew McKirahan, and slapped a two-run double into left field.

“We got a win, so that’s the biggest part,” Stanton said after ending a 0-for-12 slump. “Contributing to that is good for us and we need a series tomorrow.”

Tom Koehler (1-1) gave up six hits, two runs and two walks with three strikeouts in 5 1-3 innings for the win.

It was just the fourth multi-run inning for Miami in eight games this year.

Cahill (0-1), making the 171st start of his career, allowed five hits, four runs and three walks with two strikeouts in 2 1-3 innings in the loss.

Cahill, who has dropped five straight decisions dating to Aug. 26 with Arizona, began the night having allowed three hits, one RBI and three walks with three strikeouts in the 10 times he’d faced Stanton.

“It seems like over the years that he’s changed his approach against me,” Cahill said. “I feel like early on he would chase, and he was real patient today. I was trying to get ahead in the first inning and I left it middle-up. I think I was fortunate he didn’t hit it farther.”

Cahill’s struggles continued in the third as he became the first Braves starter to lose this year. He hit Morse with a pitch to load the bases and was chased after Marcell Ozuna walked to make it 4-0.

Sugar Ray Marimon, the fourth Atlanta reliever to make his majors debut this year, bailed out Cahill, but the Braves were trailing 5-0 hole in the fourth after Stanton’s RBI single.

Marlins: LF Christian Yelich was scratched from the lineup because of tightness in his back. Suzuki took his place, going 1 for 4 with a walk and scored two runs. Yelich, a Gold Glove winner last year, has been getting treatment recently for his back and is listed as day to day.

Braves: Manager Fredi Gonzalez had no update on starting LHP Mike Minor, who’s on the 15-day disabled list with shoulder inflammation and has yet to throw again off a mound since aggravating the injury.

Marlins: RHP Dan Haren (0-0) makes his second start of the season after allowing four hits, one run and striking out two Friday against Tampa Bay. Haren is 6-2 with a 4.50 ERA in nine starts and a relief appearance against Atlanta.