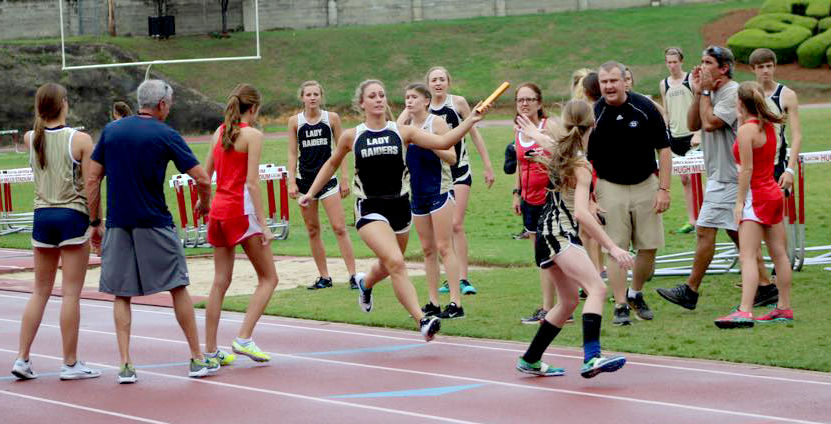 ALBANY – The Southland Academy Raiders and Lady Raiders track teams traveled to Albany on April 15 to compete in the Region 3AAA meet. After nine events, the Lady Raiders are currently in third place behind Deerfield-Windsor and Tiftarea Academy. The Raiders trail first-place Deerfield-Windsor by just eight points. On April 22, the 3200-meter run and the six field events will decide the region championship.

The Lady Raiders were represented by only eight runners, including three freshmen and three eighth-graders. The 4 x 400 relay team of Brandi Sellars, Alex Exum, Madison McPherson and Sydney Payne ran a season-best 4:37 to place second and qualify for state. Also qualifying individually was Exum, who finished as region runner-up in the open 400 with a time of 1:06.3.

Other Lady Raiders who scored in the meet were Brandi Sellars with a fifth-place finish in the 400 with a time of 1:07.8, and Karleigh Werling, who won fifth in the 800 in 2:57.8. Calyn Fort placed fifth in the 1600 in 6:19.7 and sixth in the 300 hurdles. Riley Preston won seventh in the 300 hurdles and Sydney Payne took eighth in the 200. The 4 x 100 relay team of Werling, Payne, Fort and Sellars took sixth place. Altogether, the Lady Raiders have racked up 49 points in the tournament so far.

Calhoun, Roland, Ivey and freshman Townsend Ray teamed up in the 4 x 400 Relay to take third and qualify in a season-best 3:47.88.

The Raiders currently hold 78 points in the tournament.

The tournament will be completed on April 22.