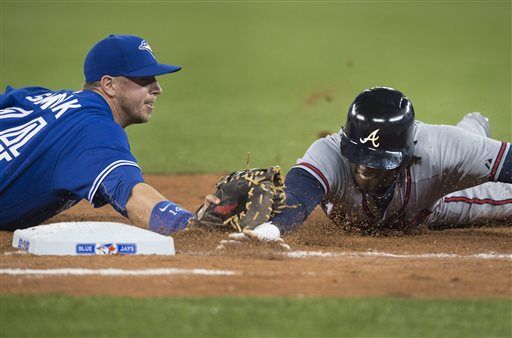 He made two against Atlanta on Sunday, and both were costly.

Jonny Gomes drove in four runs to back Shelby Miller, and the Atlanta Braves beat Toronto 5-2 to give the Blue Jays their fifth loss in seven games on their opening homestand.

Gomes’ two-out, bases-loaded double in the first ticked off the glove of Pompey, who fell down on the play and appeared to have trouble tracking the ball.

“I kind of stopped for a second and broke back and the ball started to slice back to my reverse side and I couldn’t make the adjustment in time,” Pompey said.

Pompey acknowledged he’s been “playing somewhat scared” all season out of fear of making a mistake.

“We lose that game because I don’t make that play and I take full responsibility for that,” Pompey said.

Pompey was guilty of another mistake as Atlanta made it 5-0 in the third. Freddie Freeman walked, Chris Johnson singled to center and Freeman scored on Pompey’s throwing error. Johnson took third on the throw and scored on Gomes’ fly ball to left.

With six rookies on the roster, manager John Gibbons said the Blue Jays will have to deal with mistakes from time to time.

“If you’re going to commit to them, you better be able to,” Gibbons said.

“I’m going through a little bit of a dead-arm phase,” Norris said. “It doesn’t have the same life on it and I can’t really command it like I’m used to.”

“He did a nice job, gave us the innings we needed,” Braves manager Fredi Gonzalez said of Miller.

This time, Miller kept the Blue Jays scoreless through five before Russell Martin’s two-out, two-run double in the sixth.

“You’ll take both of those outings against the Blue Jays at home,” Miller said. “You’re coming into their home field where they hit great. Coming out with a win is a positive thing.”

Andrew McKirahan got two outs in the seventh, Cody Martin pitched 1 1-3 innings, and Jason Grilli finished to remain perfect in six save chances.

Selected from Triple-A Buffalo before the game, LHP Jeff Francis became the 22nd Canadian-born player in Blue Jays history when he replaced Marco Estrada in the fifth. Along with Martin and Pompey, Francis gave the Blue Jays three Canadians in the lineup for the first time in team history. Toronto’s fourth Canadian, outfielder Michael Saunders (left knee), is on the disabled list. LHP Colt Hynes was optioned to make room for Francis.

Blue Jays: Rookie 2B Devon Travis left in the first inning after being hit in the left ribs by a pitch, then aggravating the injury when he went back to first base on a pickoff attempt. X-rays were negative. Steve Tolleson replaced Travis. Blue Jays manager John Gibbons said he hoped Travis would be able to return after Monday’s off day.