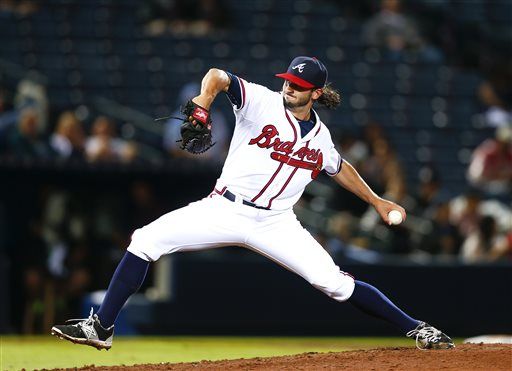 McKirahan was the fifth big league pitcher in 25 days disciplined for using performance-enhancing drugs. He was cited for Ipamorelin, which releases growth hormone.

Braves president of baseball operations John Hart said McKirahan did not say how he took the banned drug.

“Obviously as an organization we’re really disappointed,” Hart said. “Look, it’s not like these kids, these players don’t know what they can put in their bodies and can’t. We put a lot of time and energy in it. Obviously, Andrew made a bad decision. I think from an organizational standpoint, we’re certainly not real happy about that.”

Hart said he expects McKirahan to use the 80 games “to get himself in the best shape and come back in late July and go on with his career. We certainly have really liked what we’ve seen from Andrew.”

McKirahan, a 25-year-old left-hander, has a 4.15 ERA in three appearances this season. He retired the only two batters he faced in the seventh inning of Sunday’s win against Toronto.

He issued an apology in a statement released by the players association.

“I am extremely sorry for letting down the Atlanta Braves organization, my coaches, teammates and the Braves fans,” he said in the statement. “This is in no way a reflection of my character or morals. I will work hard during my suspension and pray that everyone will find it in their hearts to forgive me.”

McKirahan was selected by the Chicago Cubs on the 21st round of the 2011 amateur draft, taken by Miami in the winter meeting draft of unprotected players, then claimed by Atlanta off waivers on April 1.

Hart said McKirahan may have been tested before he was claimed by the Braves.

“My instincts are yes, that’s probably what happened,” Hart said. “But I don’t know what the timeframe was.”

Baseball’s joint drug agreement with the union says each player on a 40-man roster is tested when he reports for spring training.

“When Feiigl went down, we were really happy that we had McKirahan because Feigl was sort of the next guy,” Hart said.

Hart said the team will call up another reliever.

“At this time of year it’s almost impossible to go out and make a deal, so yes, we’re going to fill this from within, there’s no doubt,” he said.

Minnesota’s Ervin Santana, the New York Mets’ Jenrry Mejia, Seattle’s David Rollins and Atlanta’s Arodys Vizcaino were suspended for positive tests for Stanozolol, which is sold under the name Winstrol and is popular with body builders.

Santana pitched for Atlanta last season. Vizcaino, like McKirahan, was in the Cubs’ organization last year.