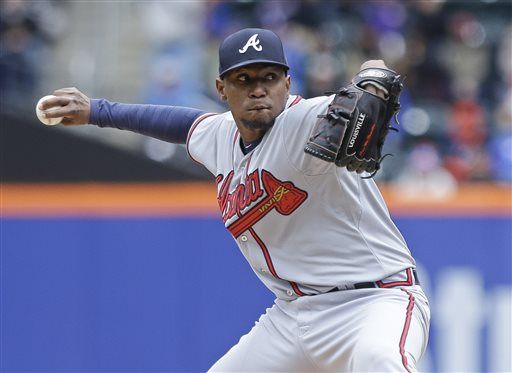 NEW YORK (AP) — On a chilly afternoon at Citi Field, Julio Teheran and the Atlanta Braves let the New York Mets walk their way to another win.

Daniel Murphy drove in four runs as the Mets matched a franchise record with their 11th straight victory Thursday, beating Teheran and the Braves 6-3 behind Bartolo Colon.

Teheran (2-1) walked three of his first four batters, and Murphy gave a big fist pump at second base after his three-run double to right.

“It was real bad in the first inning with the weather. I don’t like to make excuses, but it was affecting me a little bit. I couldn’t find my grip,” Teheran said.

The 41-year-old Colon outpitched Teheran in a matchup of unbeaten starters. New York took advantage of eight walks and tied the 1986 World Series champions for the best start in team history at 13-3.

“They’re really hot and getting all the breaks and when good teams are riding that wave you have to find a way to stop it, and we weren’t able to do it,” catcher A.J. Pierzynski said.

Andrelton Simmons had two RBIs for the Braves, who managed six runs in the three-game series. Teheran, the last pitcher to beat the Mets on April 11, walked five in 4 1-3 innings.

Atlanta relievers Ian Thomas and Sugar Ray Marimon combined to issue three free passes in the fifth. Eric Campbell drew a bases-loaded walk from Marimon, who is Teheran’s cousin, to force in the tiebreaking run.

“I’m not worried about the offense. I’m worried about our pitching and our bullpen a little bit right now,” Braves manager Fredi Gonzalez said.

Michael Cuddyer had an RBI groundout and Murphy added a run-scoring single to make it 6-3 in the seventh.

The streaking Mets, with the top record in the majors despite injuries to captain David Wright and several other important players, finished 10-0 on their first homestand this season by sweeping all their NL East rivals besides heavily favored Washington.

After beginning the streak April 12 in Atlanta, Colon (4-0) overcame a blister on his middle finger Thursday by throwing virtually all fastballs while pitching in short sleeves on a 49-degree afternoon. He allowed three runs over six innings to win his first four starts for the first time in his career and become the first four-game winner in the big leagues this year.

The previous starting pitcher 40 or older to open 4-0 was Roger Clemens in 2004 with Houston.

“Nothing fazes him,” Mets manager Terry Collins said. “He’s remarkable. He really is.”

Jeurys Familia worked a hitless ninth for his eighth save in eight tries, most in the majors.

In the sixth, Pierzynski broke too early from first base and was tagged out unassisted by the beefy Colon on a caught stealing. “I thought I could sneak one there. I was just trying to get into scoring position with two outs. Unfortunately he held the ball longer than he had the whole time,” Pierzynski said. “If I’d have gone the pitch before, I’d probably have made it.”

Braves: Not often does a 38-year-old catcher play a night game and then start again the following afternoon, but that’s what Pierzynski did. He went 3 for 3 with a walk Wednesday night, then added two more hits Thursday. He is batting .407 with three home runs. “We’re trying to win games,” Gonzalez said, adding that he checked twice on Pierzynski, who said he was fine. “He’s swingin’ it.”

Gonzalez reiterated that Pierzynski could keep getting regular playing time. Rookie backstop Christian Bethancourt is 4 for 30 (.133). “We all want Bethancourt to be the guy,” Gonzalez said. “It’ll be good for him, too. Nothing’s given to him. You’ve got to earn it.”

PUT IT IN THE BOOKS

Braves: After busing down to Philadelphia, the Braves send LHP Alex Wood (1-0) to the mound against RHP Aaron Harang (2-1) in the opener of a three-game series Friday night. Wood had a 1.29 ERA in two starts against the Phillies last season, striking out 15 and walking one in 14 innings.