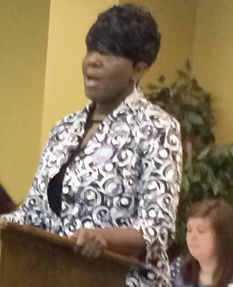 AMERICUS — The annual Relay for Life Cancer Survivors Luncheon was held April 18 at Friendship Missionary Baptist Church in Americus. The spacious auditorium was decorated with balloons and birthday posters and the dining tables and chairs were filled with the smiling faces of local cancer survivors, those who are cancer-free and those who are still fighting. The event was chaired by Alice Green and Susie Henderson and included a delicious barbecued chicken lunch, birthday cake and door prizes for every survivor.

Cathy Dukes, a local cancer survivor, was the featured speaker. She works for Middle Flint Council on Aging. Her husband was one of the two who perished in the tornado that struck Americus March 1, 2007.

“First, I give thanks to God because He is the reason for my being here … ” Dukes began. “This is indeed a blessing and an honor … to be able to share my journey through breast cancer.”

Dukes was diagnosed in 2009, in her doctor’s office. She said the news was a shock and she worried about how she would tell her daughter after having lost her father. She said she had a “fight or flight” moment but she decided to prepare her body and mind for the fight.

Dukes underwent surgery followed by chemo-therapy and radiation. She is taking a powerful drug which keeps cancer from coming back, she said.

“I’m here today to say that a diagnosis of cancer … sometimes you need to learn to fight. I’m standing here today, a five-year breast cancer survivor.”

Jessica Davis, South Atlantic Region specialist, American Cancer Society, reminded everyone of the Sumter County Relay for Life which starts at 6 p.m. today at the Americus-Sumter High School football stadium. The fun event features a survivors’ lap around the track, a caregivers’ lap, food, music, games, a talent show and the touching luminary ceremony. The event is free and open to the public.