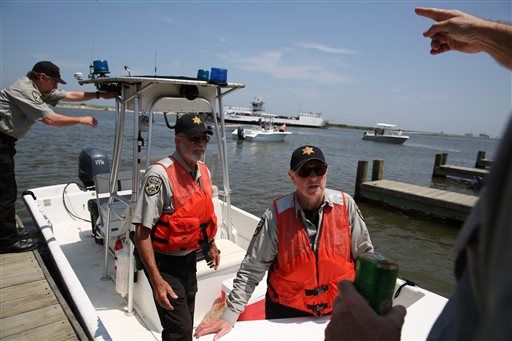 The agency said the search would resume as soon as the weather allows.

Crews have been searching for four boaters still missing after the powerful storm capsized several sailboats, killing at least two mariners, in a Saturday regatta.

The weather was worse Monday than during Sunday’s search efforts, and the Coast Guard asked volunteers to stay on the shore and look for possible survivors there.

Earlier, crews used boats to search white-capped waters and asked volunteers to walk the shore in case anything washed up.

The Coast Guard said one person initially believed missing had been found safe at home following a check of people who had registered for the race.

One skipper told The Associated Press her crew had 15 minutes warning of the storm Saturday afternoon, but the wind nevertheless hit so suddenly and with such force that her 34-foot racing cruiser nearly capsized.

Within seconds, said Susan Kangal, 52, “it went from probably 15 to 20 miles per hour to 73 miles per hour. It just shot off the charts. And that’s when you couldn’t see anything. Everything went white, (the) boat slammed to its side.”

She added, “It was frightening because at that point … I was laying on the back of the boat, between the wheel and the aft of the boat, and was standing up straight looking down at the water — watching the water starting to ease over the side.”

The Coast Guard said it would not release the names of the dead or missing until all the families are notified. The agency released a statement on behalf of the families thanking emergency response agencies and asking prayer for their loved ones.

The National Weather Service said heavy rains were possible through Monday night, and authorities asked volunteer searchers to remain on land to avoid any more casualties.

On shore, about 20 relatives of the missing gathered at the state-run Dauphin Sea Lab to await word of loved ones.

“This very difficult, very difficult for all of them,” said Michael Brown of the American Red Cross. “There is still hope. The Coast Guard has told them they are doing an active search and rescue.”

The annual race, sponsored by Mobile-area yacht clubs on a rotating basis, begins in the middle of Mobile Bay. Sailboats ranging in size from small catamarans to single-hull craft capable of carrying a half-dozen people or more race southward through the shallow waters toward Dauphin Island, a barrier island on Alabama’s coast.

More than 100 sailboats and as many as 200 people were participating in the 57th running of the race when the storm hit Saturday afternoon. Some skippers were able to lower sails and return safely to shore, but other boats capsized in fierce winds.

Gary Garner, commodore of the Fairhope Yacht Club, which organized the race, said members were “heartbroken” over the tragedy.

“We are helping and cooperating fully with the U.S. Coast Guard and other authorities in accounting for all of the sailors,” he said in an emailed statement.

Weather Service meteorologist John Purdy said Sunday that the storm moved quickly eastward through Louisiana and Mississippi, prompting a severe thunderstorm watch at 1:36 p.m. Saturday and a warning less than an hour later.

“When storms are moving quickly as in this case, things will change very rapidly especially if you are on a boat in the open waters,” Purdy said.