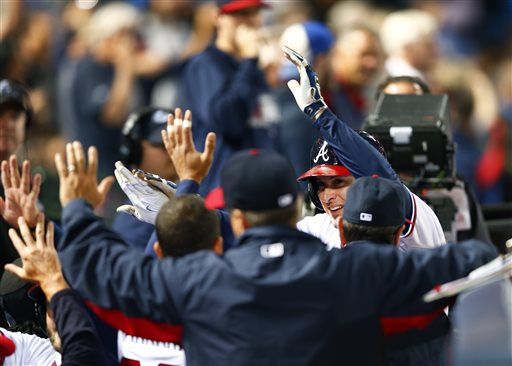 ATLANTA (AP) — Based on the intensity shown in the season’s first game between NL East rivals Washington and Atlanta, the remaining 18 games in the season series could be interesting.

Kelly Johnson homered and drove in three runs, Eric Stults pitched 6 1-3 strong innings and the Braves beat Washington 8-4 on Monday night to give the Nationals their sixth straight loss.

Tensions rose following a hard slide into third base by Atlanta’s Andrelton Simmons in the fifth. Simmons was safe when he knocked the ball out of Washington third baseman Yunel Escobar’s glove and Escobar left the game with a cut on his left hand.

Both dugouts were warned after Washington’s Rafael Martin hit Simmons with a pitch to open the bottom of the seventh. Jonny Gomes, who wasn’t playing, charged out of Atlanta’s dugout and was ejected.

Simmons defended his slide as “going hard.” He said he expected a response.

“I kind of knew they were looking at me kind of bad after the slide,” Simmons said. “I had it in my mind it might happen.”

Escobar, whose hand was swollen, said he expects to miss a day or two.

Asked if he thought Simmons’ slide was clean, Nationals manager Matt Williams said “I’m not going to comment on that.”

“That kid’s a good player, plays with a lot of energy but he’s got to be way smarter than that,” Desmond said. “That was an ugly play and it looked ugly. I’m sure when he goes back and looks at it, hopefully he learns from it.”

The Nationals committed four errors, including two by Fister on errant pickoff attempts. Desmond added his ninth error in 20 games.

Stults (1-1) allowed two runs on four hits and three walks. Kelly Johnson had three hits, including a run-scoring single off Rafael Martin in the seventh.

Cody Johnson took over for Stults with one out in the seventh and hit Reed Johnson with a pitch to load the bases. A video review was needed to determine the pitch skimmed Reed Johnson’s hand.

Simmons was stranded on third in the fifth when Freddie Freeman struck out while trying to check his swing. Freeman said he was surprised he was ejected by third base umpire John Hirschbeck. Freeman said Hirschbeck used profane language when telling him to shut up.

“It’s something I haven’t been a part of,” Freeman said. “I didn’t say ‘You’re bad.’ I didn’t personalize anything. I just said ‘That’s bad’ a few times. I don’t think I’ve ever heard an umpire say something like that to a player before.”

Nationals: IF Anthony Rendon (left knee sprain) was scratched from a scheduled injury rehabilitation game with Double-A Harrisburg on Monday due to fatigue. Williams said Rendon is working at third base and second base at Harrisburg in preparation to play both positions with the Nationals.

Braves: Manager Fredi Gonzalez is concerned about his suddenly ailing defense. The Braves had one error through their first 12 games before committing nine errors in their last six games of a 3-6 road trip, including four on Friday night at Philadelphia. Jace Peterson added two throwing errors against the Nationals.

Nationals: Following the game, Williams said right-hander A.J. Cole would be recalled from Triple-A Syracuse to fill in Tuesday night for Max Scherzer, who will miss his scheduled because of a sprained right thumb.

Braves: RHP Julio Teheran will try to bounce back after walking five batters in 4 1-3 innings in a 6-3 loss to the Mets on Thursday. Teheran is 2-1 with a 4.64 ERA.