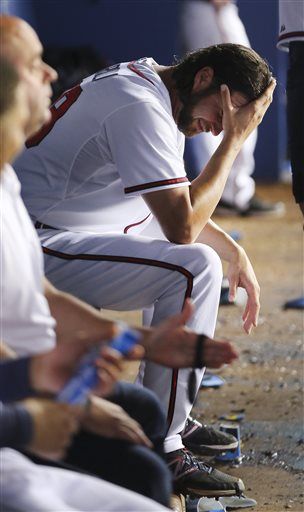 But Freeman also wasn’t pleased that his friend and former teammate, Dan Uggla, was getting booed at Turner Field.

Uggla played the villain’s role perfectly Tuesday night, driving in five runs, including a three-run homer in the ninth inning, to help Washington rally from the franchise’s biggest deficit and beat the Braves 13-12.

Snapping a six-game losing streak, the Nationals chipped away at the lead as Jose Lobaton hit a three-run homer in a four-run fifth, Denard Span hit a solo homer in the sixth and Uggla had a two-run triple and Reed Johnson a pinch-hit RBI single in the seventh.

Washington’s previous biggest comeback was on June 17, 2006, when it trailed the New York Yankees by seven runs.

It marked the first time the Nationals have won a game in which they allowed 11 runs — and the outcome was reverse fortune from July 20, 2012, at home when Stephen Strasburg led the Braves 9-0 in the sixth but Washington lost 11-10 in 11 innings.

Uggla, released last year by the Braves and still owed over $18 million at the time, was booed in every at-bat, but he quieted the crowd with his first homer for Washington, a blast into the seats in left field off closer Jason Grilli (0-1).

“It was cool,” Uggla said. “This stadium, this place, is very special to me. I had a lot of great memories here. Whatever the case is, everybody knows the story of how it’s gone the last couple of years. But that doesn’t take away from any of my good memories here.”

A.J. Pierzynski went 4 for 4 with four RBIs and Freeman went 4 for 6 for Atlanta.

“You’re up 9-1 in the second inning and that’s a game you’re supposed to win,” Pierzynski said. “Give them credit. They kept coming back and chipping away. Unfortunately in the ninth inning, we made a mistake to Uggla and he didn’t miss it.”

Grilli allowed three hits, three runs, one walk and struck out two. It was his first blown save in eight chances.

Blake Treinen (1-2) gave up two hits, one run, three walks and struck out one to earn the victory. Drew Storen earned his fifth save after facing four batters in the ninth.

The teams combined for 32 hits.

Pierzynski, who put Atlanta up 10-2 in the fourth and 11-7 in the sixth with RBI singles, gave the Braves a 12-10 lead in the seventh with another RBI single.

The 38-year-old Pierzynski, signed as a backup catcher in January, has a .475 average and 14 RBIs in 40 career at-bats against Washington.

Atlanta starter Julio Teheran allowed 10 hits and seven runs — three earned — and struck out four. He has given up 12 earned runs in his last three starts, a span of 15 innings, to raise his ERA over three runs to 4.64.

“I’m a little concerned,” Braves manager Fredi Gonzalez said of Teheran’s performance. “A lot of home runs (six in last three starts). The stuff and miles per hour are there. The location is just not. It looked like they had some pretty good swings all night at him in all kinds of different counts.”

Nationals starter A.J. Cole, recalled from Triple-A Syracuse earlier in the day, gave up nine hits, one walk and nine runs — four earned — in his first career start. The right-hander struck out one in what could be his only turn in the rotation as ace Max Scherzer recovers from a sprained right thumb.

Atlanta made it 8-1 with a seven-run second. Andrelton Simmons had a two-run single, Cole made a two-run fielding error while trying to cover first on Alberto Callaspo’s grounder, Kelly Johnson had a two-run double and Jace Peterson an RBI single.

The error by Cole was Nationals’ 23rd, most in the majors.

Jayson Werth had two sacrifice flies for the Nationals.

Nationals: Manager Matt Williams said 3B Yunel Escobar’s left hand is “scraped up pretty good” after Simmons’ hard slide into third the night before. Williams added that Escobar could have played Tuesday “if he had to,” but said he still hasn’t tried to grip a bat.

Braves: Gonzalez was initially worried that Simmons had been hurt on the play, but insisted he wasn’t trying to hurt Escobar. “He just slid late,” Gonzalez said. “I’m sorry Escobar got banged up. I hope it’s not too serious, but there’s nothing malicious about it whatsoever.”

Nationals: RHP Jordan Zimmermann (1-2) will try to win for the first time in four starts. Zimmermann is 4-2 with a 2.93 ERA in 10 career starts against Atlanta.