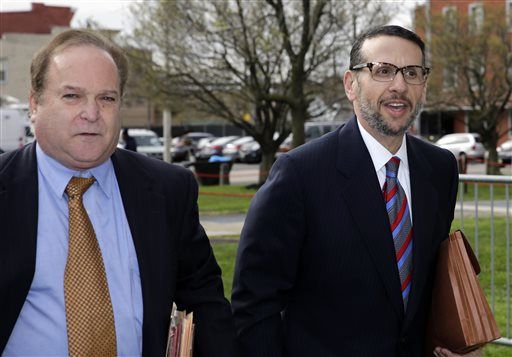 NEWARK, N.J. (AP) — Three former allies of Gov. Chris Christie were charged Friday in the George Washington Bridge traffic jam scandal that has cast a long shadow over Christie’s White House prospects, and one of them pleaded guilty.

Christie himself was not publicly implicated.

David Wildstein, an official at the Port Authority of New York and New Jersey at the time of the tie-ups, pleaded guilty to federal conspiracy charges and could face about two years in prison at sentencing Aug. 6.

In court, he said he and two other Christie loyalists closed lanes and engineered the traffic jams as part of a political payback scheme against a Democratic mayor, then worked together to cover it up.

The two people he implicated in court — former Christie deputy chief of staff Bridget Kelly and Bill Baroni, who was the governor’s top appointee at the Port Authority — were charged in an indictment unsealed Friday after Wildstein’s plea.

Wildstein gave no indication in court that Christie had any role in the scheme. The Republican governor has insisted all along that he knew nothing about it.

Baroni’s lawyer said he was still looking at the indictments and would comment later. Kelly’s attorney did not immediately return a call.

The nine-count indictment accuses Kelly and Baroni of conspiracy, fraud, deprivation of civil rights and other charges.

The scandal broke wide open more than a year ago when an email from Kelly to Wildstein was revealed. It read, “Time for some traffic problems in Fort Lee.” Wildstein’s reply: “Got it.” That exchange was key in the indictment.

Wildstein said they orchestrated the lane closings to start on the first day of school to punish the mayor of Fort Lee, a town at the foot of the bridge, for not endorsing Christie’s re-election bid.

He said they also agreed to cover it up by claiming the lane closings were part of a traffic study. And he said they agreed to ignore complaints from Fort Lee Mayor Mark Sokolich.

Before Wildstein appeared in court, Christie declined to comment Friday as he left a hotel in McLean, Virginia. But on Wednesday, when asked about impending action in the case, he brushed off the potential impact.

“I don’t think that has anything much to do with me,” he said.

Two of the three access lanes to the bridge in Fort Lee were shut down for four mornings in September 2013, causing huge delays.

By the time the incriminating email was made public, Wildstein had resigned, as had Baroni. The governor soon after fired Kelly and cut ties with Bill Stepien, his two-time campaign manager. Stepien was not mentioned in Friday’s court hearing.