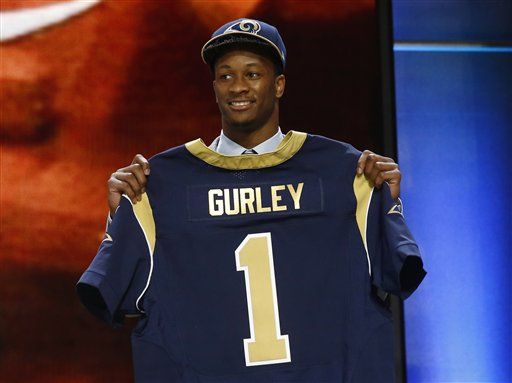 ST. LOUIS (AP) — The St. Louis Rams made Todd Gurley the first running back taken in the first round since 2012.

They are just not sure when he will be ready to play.

The Rams pulled a bit of surprise Thursday night by taking Gurley at No. 10 overall, and they promised they won’t rush the former Georgia star as he rehabs from a left knee surgery.

“This is the running back of our future,” coach Jeff Fisher said. “It makes no sense to put him in a bad situation sooner than we have to.”

Fisher was non-committal about Gurley’s chances of suiting up for the opener, saying “There’s always that possibility.”

Gurley said he expected to go in the top 10. He thought playing in Week 1 was a “realistic goal” but also hedged a bit.

The 6-foot-1, 226-pound Gurley was a preseason Heisman Trophy candidate and the junior off to a strong start last season before he was suspended for four games for violating NCAA rules for taking $3,000 for autographed memorabilia and other items over two years. He was injured in his first game back in mid-November, ending the season with 911 rushing yards and nine touchdowns in six games, averaging 7.4 yards per carry.

In his first two seasons at Georgia, Gurley ran for 2,374 yards and 27 touchdowns. He had 18 100-yard games plus a career-best 208 yards against Tennessee in 2014 and scored 44 touchdowns, second in school history behind Herschel Walker’s 52.

Fisher has a history of success taking running backs high, selecting Eddie George in 1996 and Chris Johnson in 2004 when he was with the Titans. Johnson had six straight 1,000-yard seasons, including 2,006 in 2009. George is Tennessee’s career leading rusher and starred on the 1999 team that lost to the Rams in the Super Bowl.

Fisher believes Gurley could be in George’s category.

“He’s special, yeah, he is,” Fisher said. “Their running styles are different but when the career’s all said and done he could be that guy, yes.”

Fisher said he got a congratulatory text from George. Steven Jackson, who had eight consecutive 1,000-yard seasons for the Rams from 2005-2012, tweeted “Thank you @STLouisRams for drafting a running back in the 1st round of the @NFL Draft! Congrats to @TG3!! #SaveTheRunningBack #STRB

Tre Mason, a third-round pick last year, led the Rams with 765 yards rushing and averaged 4.3 yards per carry. Now Gurley is in the mix for the Rams (6-10), who opted to get backfield help for new quarterback Nick Foles instead of addressing a thin offensive line with their first pick of the draft.

“They did make this thing a three-day event, I didn’t decide that,” general manager Les Snead said. “We’ll see if we can help improve that position. We’re well aware.”

The Rams have six picks, less than a full allotment after totaling 28 selections the previous three years as the Robert Griffin III trade with Washington helped the team rebuild the roster.

The Rams have a pick in every round except for the fifth, sent to Philadelphia in the quarterback swap of Foles for Sam Bradford. St. Louis owns the Eagles’ fourth-round pick as part of the deal. They sent their fourth- and sixth-round picks to Tampa Bay for safety Mark Barron and got a sixth-round compensatory pick.

Fisher is entering the fourth year of a five-year deal he got after taking one year off. In his last 10 seasons, he’s produced two winning teams. He and Snead have yet to turn around the Rams, winning seven games each of the first two seasons and backsliding to 6-10 in 2014.

They have just two starters back on the offensive line, tackle Greg Robinson and guard Rodger Saffold. They could still re-sign tackle Joe Barksdale, an unrestricted free agent. Two veterans, tackle Jake Long and center Scott Wells, were released after the season due to injury issues.