US factory activity improves in April, but hiring declines 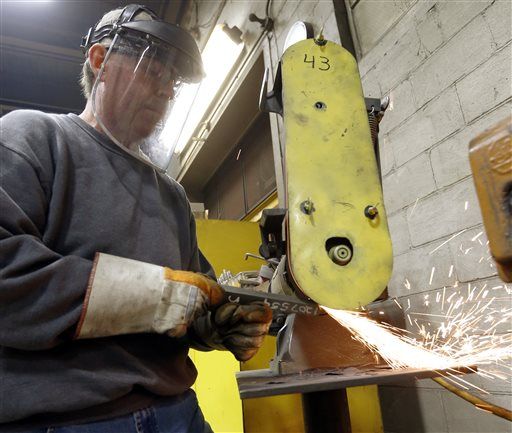 WASHINGTON (AP) — U.S. factories expanded in April at the same pace as in March, but manufacturers are starting to curtail hiring in a possible sign of weakness.

The Institute for Supply Management, a trade group of purchasing managers, said Friday that its manufacturing index was unchanged at 51.5.

The index had dropped in the prior five months. Still, any reading above 50 signals expansion.

U.S. manufacturers have faced a drag in recent months from falling oil prices and a stronger dollar. The drop in oil prices has cut into demand for pipelines and equipment used by drillers and energy companies. At the same time, the dollar has risen in value over the past year against the euro and other currencies, causing American-made goods to be more expensive abroad and hurting exports.

The drag from the since-resolved West Coast ports disruption continues, as shipments have been delayed because of a labor dispute that was largely settled in February and March.

New orders and productivity improved in April, but the employment component of the index slipped below 50 to 48.3. The drop in the employment indicator could indicate less hiring ahead and even the possibility of layoffs or it could be a blip. The U.S. economy barely grew in the first three months of 2015, with gross domestic product rising at an annual rate of 0.2 percent.

“It’s more of tapping the brakes to assess where this manufacturing economy and overall economy going,” he said. “We’re obviously off to a slow start in the first quarter.”

Still, some manufacturers say they are struggling to find workers. Employers have added 3.1 million jobs over the past year, cutting the unemployment rate to a relatively low 5.5 percent from 6.6 percent. The hiring surge has made it increasingly difficult to find talented employees without increasing wages.

One furniture manufacturer said in the ISM survey that it “remains difficult to find qualified individuals.”

There are signs that the negative impact of a stronger dollar is lessening for factories. The export component swung to growth in April after contracting in March. “The world is adjusting to a higher dollar,” Holcombe said.

Out of 18 manufacturing industries, 15 reported growth and two reported an outright decline in April. The sectors that declined are apparel and computer and electronic products.