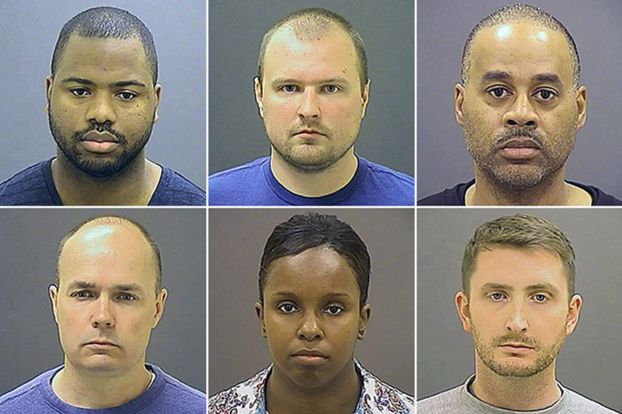 BALTIMORE — Six police officers were charged Friday in the death of Freddie Gray as Baltimore’s top prosecutor acted with surprising swiftness in a case that ignited protests and rioting here. She described how Gray allegedly was arrested illegally, treated callously by the officers, and suffered a severe spine injury in the back of a police van while his pleas for medical help were ignored.

Her decision to file charges brought joy and relief to low-income West Baltimore and beyond, at least temporarily. By nightfall, thousands of residents had taken to the streets in peaceful demonstrations.

One officer is accused of second-degree murder, and three others were charged with manslaughter.

“To the people of Baltimore and the demonstrators across America, I have heard your call of ‘No justice, no peace,’ ” Mosby declared. Her announcement of the charges came after days of angry yet nonviolent marches in the city and overnight rioting and looting on Monday, mostly in West Baltimore.

“Your peace is sincerely needed as I work to deliver justice on behalf of this young man,” Mosby said of Gray, 25, who died in a hospital April 19 — a week after three of the officers took him into custody on a West Baltimore street in what Mosby said was an illegal arrest. She said Gray was carrying a folding knife, which is legal in Maryland.

Gray’s family said it was “satisfied” by the filing of the charges. Richard Shipley, Gray’s stepfather, also issued a plea for demonstrators to assemble peacefully this weekend.

“Where there is no justice, there is no peace,” Shipley said. “But let us have peace in pursuit of justice.”

An attorney for Baltimore’s police union reacted angrily to the charges, calling them “an egregious rush to judgment” and saying that “these officers did nothing wrong.”

Except for the allegedly illegal arrest — which resulted in false- imprisonment charges against the three officers who first encountered Gray — allegations in the case stem not so much from what the six officers did to Gray as from what they failed to do after he was taken into custody the morning of April 12.

Mosby said Gray, in handcuffs, was placed in the back of a police van but was not secured by a seat belt, as required by police rules. At one point during a trip that involved four stops, he was removed from the van and then put back in “on his stomach, headfirst, onto the floor,” Mosby said. After the first stop, Gray “suffered a severe and critical neck injury as a result of being handcuffed, shackled by his feet and unrestrained” by a seat belt, she said.

Some of the officers checked on Gray in the van, Mosby said, and Gray asked for medical attention several times. However, Mosby said, “despite Mr. Gray’s seriously deteriorating medical condition, no medical assistance was rendered or summoned.” She said Gray was taken by ambulance to a hospital only after suffering cardiac arrest.

The officer who drove the van faces the most serious charge: second-degree murder, punishable by up to 30 years in prison. Three other officers, including a lieutenant, are accused of involuntary manslaughter, which carries a possible 10-year term.

In addition, those four officers, along with two others, were charged with second-degree assault and misconduct in office. Three of the six also are accused of false imprisonment.

Gray was black, as are three of the accused officers. Three of the officers are white.

By late Friday, the six officers had been released on bail, online court records show. After what will certainly be a protracted pretrial process, the case will eventually end up in Circuit Court.

The union attorney, Michael Davey, representing Fraternal Order of Police Lodge 3, told reporters, “We have grave concerns about the fairness [and] integrity of the prosecution” of the six officers.

“No officer injured Mr. Gray, caused harm to Mr. Gray, and they are truly saddened by his death,” he said.

Mosby, a daughter and granddaughter of police officers, has been the city’s elected top prosecutor since January. The unexpected announcement of the charges Friday was greeted with applause by many community leaders and residents who said police misconduct occurs routinely in poor sections of the city.

The charges came less than two weeks after Gray’s death — a stunningly rapid turnaround for such an investigation.

It was more than three months between the Aug. 9 shooting death of Michael Brown in Ferguson, Missouri, and St. Louis County prosecutor Robert McCulloch’s announcement that a grand jury decided not to indict Ferguson police officer Darren Wilson. Nearly five months after Eric Garner died during his arrest by New York police officer Daniel Pantaleo, a grand jury declined to issue an indictment.

Studies have found that in cases in which officers are charged, particularly in incidents that occurred on duty, prosecutors historically have had a hard time getting guilty verdicts because juries are often sympathetic to police officers.

Rice, Miller and Nero were on bicycle patrol the morning of April 12 when Rice “made eye contact” with Gray near North Avenue at Mount Street in West Baltimore, Mosby said. She said Gray then ran, with the officers in pursuit, before he was caught a few blocks away on Presbury Street.

Gray “was then placed in a prone position with his arms handcuffed behind his back,” Mosby said. “It was at this time that Mr. Gray indicated that he could not breathe and requested an inhaler, to no avail.”

Miller and Nero moved Gray to a sitting position on the sidewalk and frisked him, finding the folding knife “clipped to the inside of his pants pocket,” Mosby said. She said Gray was then placed “back down on his stomach, at which time [he] began to flail his legs and scream” as Miller and Nero forcibly restrained him.

The van arrived, driven by Goodson, and Rice, Miller and Nero loaded the handcuffed Gray into the back, without securing him with a seat belt, Mosby said. She said the van initially was bound for a police facility downtown. After a short distance, though, Goodson stopped on Baker Street so that Rice, Miller and Nero could “complete required paperwork.”

There, Rice, Miller and Nero took Gray out of the van and placed shackles on his ankles, and then returned him to the van, headfirst, on the floor, Mosby said.

She said Gray suffered a critical neck injury after the van left Baker Street. After traveling nearly a mile, Goodson stopped the van at Mosher Street and Freemont Avenue “in order to observe Mr. Gray,” Mosby said. “Despite stopping for the purpose of checking on the status of Mr. Gray’s condition, at no point did he seek or did he render” medical aid.

Goodson stopped again after several blocks, at Dolphin Street and Druid Hill Avenue, and radioed to a dispatcher that he needed to check on the condition of his prisoner, Mosby said. She said Porter, on patrol, met Goodson at the intersection.

She said Goodson and Porter checked on Gray, “who at that time requested help and indicated that he could not breathe.” Porter asked Gray “if he needed a medic, at which time Mr. Gray indicated at least twice that he was in need of a medic.”

Porter helped Gray off the floor and onto a bench, Mosby said, but neither officer summoned medical help for him. Instead, Goodson, “in a grossly negligent manner,” chose to drive to North and Pennsylvania avenues to pick up another man who had just been arrested, Mosby said. “Once the wagon arrived, Officer Goodson walked to the back of the wagon and again opened the doors . . . to make observations of Mr. Gray.”

White met the van at North and Pennsylvania avenues. She “observed Mr. Gray unresponsive of the floor of the wagon” and “spoke to the back of Mr. Gray’s head,” Mosby said. “When he did not respond, she did nothing further, despite the fact that she was advised that he needed a medic.”

The van eventually arrived at the Western District police station, where officers left the ailing Gray in the van while the other prisoner was processed, Mosby said. By the time White and two other officers, who were not charged, went to remove Gray from the van, he had suffered cardiac arrest and “was no longer breathing at all.”

“Depraved-heart murder requires what I call super-gross negligence,” said Robert Bonsib, a Maryland defense lawyer and former prosecutor who is not involved in the case.

“This appears to be a complicated set of facts,” Bonsib said.

Glenn Ivey, a former Prince George’s County state’s attorney, said this about Mosby: “What she’s saying is, [Goodson’s] his actions were outrageous, and he should have known the actions, or inaction, could cause Mr. Gray’s death.”

Six police officers were charged May 1 in the death of Freddie Gray as Baltimore’s top prosecutor acted with surprising... read more