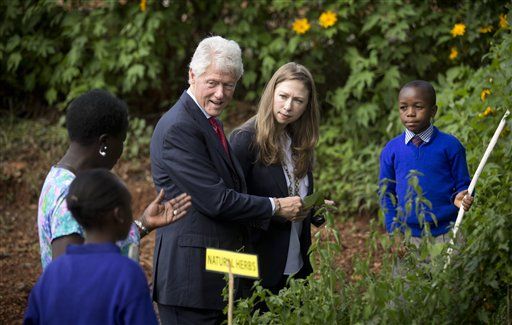 “There’s been a very deliberate attempt to take the foundation down,” Clinton said in an interview aired Monday on NBC’s “Today” show. “And there’s almost no new fact that’s known now that wasn’t known when she ran for president the first time.”

Clinton and his daughter, Chelsea, were on a nine-day tour of Clinton Foundation projects in Africa. The global charitable effort was set up by the former president after he left office.

Critics have raised questions about possible connections between donations made by foreign governments and policies his wife, Hillary Rodham Clinton, pursued while serving as secretary of state. And now that Hillary Clinton is running for president, critics have questioned whether long-term political donors are trying to win favor with the politically powerful Clinton family by supporting its charitable arm.

Bill Clinton said 90 percent of donors give $100 or less. But over half of the donors giving $5 million or more are foreign, including foreign governments. Under pressure, the foundation recently announced it will only take money from six Western countries.

“It’s an acknowledgment that we’re going to come as close as we can during her presidential campaign to following the rules we followed when she became secretary of state,” he said.

He added: “I don’t think that I did anything that was against the interest of the United States.”

Clinton also said he will continue to speak at events if asked. Some people have questioned his paid speaking engagements, which can command as much as $500,000 or more.

When asked whether he would step down as the foundation’s president if his wife is elected president, Clinton said he would consider it if asked.