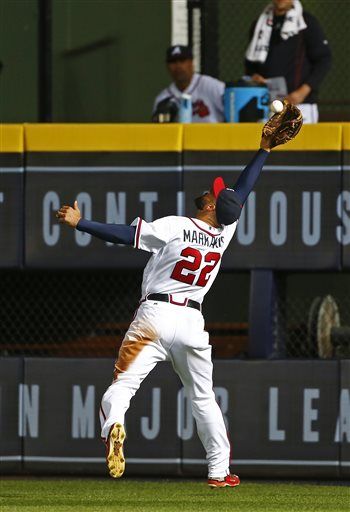 ATLANTA (AP) — Alex Wood’s second straight poor start has the young Atlanta left-hander wondering how he can reclaim the form that made his 2014 rookie season a success.

Wood struggled with his command and was pulled in the fifth inning as Jeff Francoeur and the Philadelphia Phillies rolled to a 5-2 victory over the Braves on Monday night.

Wood (1-2) said his sinker and changeup “haven’t been there.” He allowed five runs in five innings in a 13-4 loss to Washington in his last start.

“I’ve got to make an adjustment,” Wood said after his ERA rose to 4.32 with his second straight loss. “It’s a humbling game, to say the least.”

Francoeur, who began his career with the Braves, ended his 0-for-19 drought with four hits and drove in two runs.

Francoeur’s family, including his wife, daughter and grandmother, watched as he had a run-scoring double off Wood in Philadelphia’s three-run first inning. He drove in another run with a triple off Jim Johnson in the ninth. He also had two singles.

“Anytime that happens it feels good but obviously in Atlanta, with my family and my daughter here, it was special,” Francoeur said.

Aaron Harang (3-2), who pitched for the Braves last season, allowed five hits and one run in six innings. In two starts against Atlanta this season, Harang has allowed one run and seven hits in 14 innings. He was 12-12 with a career-best 3.57 ERA with Atlanta last season.

Carlos Ruiz had two hits, including a two-run single, and Darrin Ruf had three of the Phillies’ season-high 14 hits.

Harang gave up the run in the sixth when Andrelton Simmons tripled off the wall in center field and scored on Freddie Freeman’s single.

With Freeman still on first, Odubel Herrera caught Jonny Gomes’ drive at the top of the wall in center. Herrera made the leaping catch after being unable to run down Simmons’ drive.

Phillies closer Jonathan Papelbon gave up a run-scoring infield hit to Nick Markakis in the ninth.

Phillies manager Ryne Sandberg came out of the dugout in the eighth when an inside pitch from Luis Avilan sent Ben Revere to the ground. The pitch appeared to hit the knob of Revere’s bat. Revere then took a called third strike to end the inning.

Sandberg said after the game he didn’t know if Avilan was wild or trying to brush back Revere.

LOCKED IN AT LEADOFF

Markakis ended an 0-for-14 slump with a leadoff single in the first, his first of two hits. Markakis hit leadoff for the 10th straight game and appears locked into the spot.

“Of all the options we have, he’s the one who makes the most sense,” Gonzalez said before the game.

Phillies: A healthy 1B Ryan Howard was rested from the starting lineup against the left-handed Wood. Howard is hitting .176 against left-handers and .193 overall.

Braves: IF-OF Kelly Johnson was rested after making eight straight starts, leaving the Braves with their 26th different lineup in as many games. Johnson entered the game in left field in the eighth.

Phillies: RHP Chad Billingsley’s long fight back to the major leagues will end when he comes off the 15-day DL for his first start since April 15, 2013, for the Dodgers against San Diego. Billingsley has come back from two elbow surgeries and was with the Phillies on Monday.

Braves: RHP Shelby Miller (3-1) will try to bounce back from his first loss as he tries for his second win against the Phillies this season. He allowed two runs in six innings in a 5-2 win at Philadelphia on April 25.