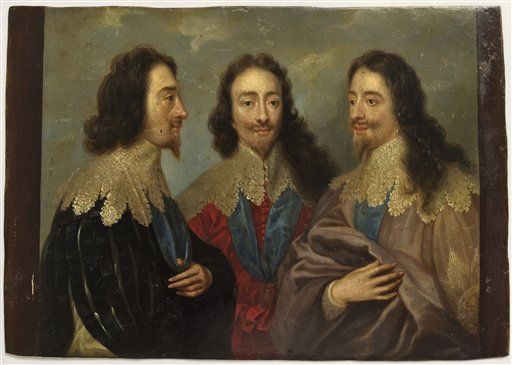 WASHINGTON (AP) — Five paintings missing since World War II are being returned to collections in Germany at the behest of the heirs of their American acquirers.

The paintings, including three won by an American GI in a poker game, were turned over to the German government Tuesday. Their return was organized by the State Department and the Monuments Men Foundation, which promotes the work of those who protected cultural works during the war and seeks to track down and repatriate objects that went missing.

The three paintings won by the GI in the poker game, stored in a potassium mine for safekeeping during the war and then mailed home to his wife, are from an art gallery in the central German city of Dessau. They are works by the Flemish Baroque painter Frans Francken III, the German painter Christian Wilhelm Ernst Dietrich and Austrian artist Franz de Paula Ferg, according to the foundation.

The other two — a painting of Queen Victoria and her eldest daughter, Victoria, who married German Emperor Frederick III, and a painting of Charles I — had been in a castle near Frankfurt that was confiscated by the U.S. military in 1945 and turned into an officers’ club. They were purchased by an American woman who was serving in Germany as a librarian in the U.S. Special Services after the war, said the foundation.

The paintings are among hundreds of thousands of cultural items missing since the end of the war that the Monuments Men Foundation hopes to help recover and return to their rightful owners. The heirs of the GI and the librarian contacted the foundation last year amid publicity surrounding the release of the George Clooney film “Monuments Men,” an adaptation of the book by the same name that memorializes the team of museum directors, curators and educators deployed to prevent the destruction of historic treasures during WWII.