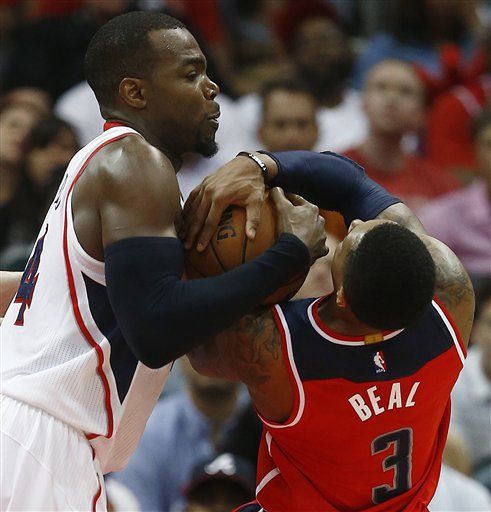 ATLANTA (AP) — Shortly before tipoff, the Atlanta Hawks learned that John Wall wouldn’t be playing for the Washington Wizards in Game 2 of the Eastern Conference semifinals.

That should have made things a lot easier for top-seeded Atlanta, right?

Taken to the limit again, the Hawks finally pulled away for a 106-90 victory over the Wizards on Tuesday night that was much closer than the score indicated and evened the series at one game apiece.

DeMarre Carroll scored 22 points, Kyle Korver bounced back from a miserable first half, and Al Horford made some huge plays when the Hawks needed them most.

“We knew this was a game we had to win,” Carroll said. “It was kind of a funky game.”

Having already been stunned at home in Game 1, Atlanta seemingly caught a huge break when the Wizards announced just before the game that Wall wouldn’t play because of an injured left hand. Actually, though, it seemed to work in Washington’s favor.

The road team again played with plenty of confidence. The Hawks, it seemed, relaxed just a bit.

“It’s dangerous, man,” Atlanta’s Kent Bazemore said. “Oh, their best player is not playing, so they don’t have a chance. … But they still have a very dangerous team.”

Ramon Sessions did an admirable job filling in for Wall, leading the Wizards with 21 points.

It wasn’t enough to prevent Washington’s first loss of these playoffs.

“Just try to push the team, just like John does,” Sessions said. “It wasn’t just me. Everybody tried to step up.”

After Washington closed to 84-81, Horford dropped in a layup, knocked down a 19-foot jumper and came up with a steal. Then there was Korver, who went 1-for-7 from behind the 3-point line in the first half but kept firing away. He made three 3s after the break, including one from the corner with just under 3 minutes remaining that gave the Hawks a 98-88 lead, stifling Washington’s last spurt — a 3-pointer from Paul Pierce, followed Bradley Beal’s long jumper with his foot on the stripe.

“Man, I had some good looks in the first half,” Korver said. “You’ve just got to stay with it. You can’t stop shooting.”

Washington won its first five playoff games, sweeping Toronto before shocking the Hawks 104-98 to start the second round.

Now the series shifts to Washington, but the teams are off for three days before Game 3 on Saturday.

For Carroll, it was his sixth straight game with at least 20 points, giving Atlanta another much-needed offensive lift from its defensive stopper. Horford and Paul Millsap had 18 points apiece, with Millsap also grabbing 11 rebounds. Korver finished with 12 points — all from beyond the arc — and Bazemore added 10.

Beal, playing on a sprained right ankle, had 20 points and seven assists. Pierce and Otto Porter both chipped in with 15 points.

Following the pattern of Game 1, the Hawks built an early 10-point lead but couldn’t put away the Wizards.

Washington was down 53-46 at halftime, briefly tied the game in the third period, and trailed 80-75 going to the final quarter. Wall cheered on every basket from the bench, hoping the Wizards could pull off an improbable victory without their dynamic star.

They couldn’t quite finish the job, but the next two games are at home.

Wizards: The five-game playoff winning streak was the longest in franchise history. … With Wall out, Garrett Temple moved into the rotation. He played about 13 minutes and had two points. … Nene had another dismal game. After going scoreless in the opener, he had only two points and four rebounds. … Marcin Gortat fouled out with 4:26 left. He had 10 points and nine rebounds. … While Sessions exceeded Wall’s usual scoring output, the replacement point guard had only four assists — nine less than Wall in Game 1. Beal led the Wizards with seven assists and Porter had five.

Hawks: Atlanta has had a double-digit lead in seven of its eight games this postseason. The Hawks are 5-2 in those contests. … Atlanta made only 10 of 29 from 3-point range but again did a good job on the boards, outrebounding the Wizards 44-40. … Point guard Jeff Teague, with nine points, was the only starter who didn’t reach double figures. But he made a big contribution with eight assists and seven rebounds.

While Wall didn’t do any work at practice Monday, there was no indication he wouldn’t play in Game 2. During his pregame availability, just 90 minutes tipoff, coach Randy Wittman said everyone was available and he had not considered sitting out Wall.

Then, the inactive list came out — and Wall was on it.

“The swelling was too much for him to handle,” Wittman conceded after the game.

Wall is listed as day to day, which apparently means nothing until the active roster comes out for Game 3.