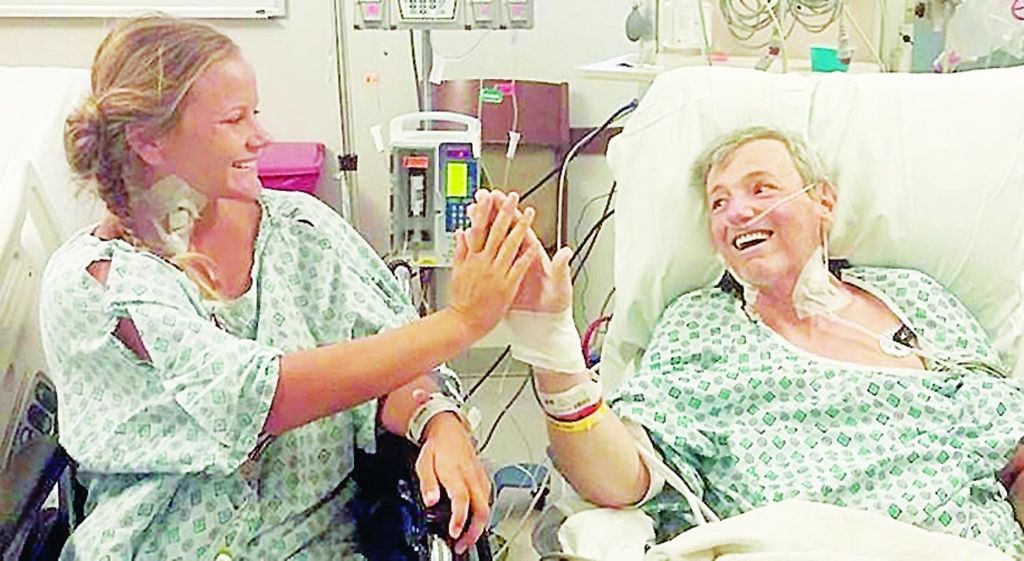 DANVILLE, Pa. — One year after a liver patient survived the most grim prognosis — “Doctors told my wife I had a couple hours to a day at most” — a young Pennsylvania woman who learned of Tom Hoover’s plight on Facebook donated 70 percent of her liver to the 64-year-old she didn’t even meet until after the surgery.

Twenty-six-year-old Julie Sherman, Hoover said, is his “donor daughter” and an “angel.”

“It’s unbelievable the way I feel today,” Hoover told The Daily Item on Friday. “I cut the grass this week.”

Sherman saw the online post by a friend of Tom’s wife, Linda, last May.

“I knew I could donate based on the blood type,” she said.

She spoke to Linda Hoover the next day and started undergoing testing. She spent two days at the University of Pittsburgh Medical Center, where her blood was tested, an EKG performed and other procedures to make sure her liver was big enough and healthy enough for the surgery.

“I thought, what kind of a person would I be if I knew I could help and didn’t?” Sherman said. “Once I met Tom and saw the way he talked about his grandson, T.J., with tears in his eyes, (that) is the way my mother talks about my nephew.”

Hoover’s grandson is 7, and Sherman’s nephew, Elijah, is 4.

Hoover was diagnosed with nonalcoholic liver disease May 16, 2013, after he started getting sick in 2012. He thought he was dying in August 2013.

“Doctors told my wife I had a couple hours to a day at most. My kids, wife and grandkids came and hugged me, and with that energy, I knew I had to fight it,” said Hoover, who was hospitalized at Geisinger Medical Center for 22 days.

Sherman spent 10 days in the hospital, and Hoover was there 42 days.

Three months later, Sherman was back at work as a personal trainer at Planet Fitness in Shamokin Dam, Pennsylvania. Hoover also is building strength at Bloomsburg Health and Fitness and can now walk two miles at a time. Before, he couldn’t make it 10 feet.

At their three-month appointment, doctors said Sherman’s liver had regenerated 82 percent. “By now, it should be 100 percent,” said Sherman, who works full-time and also works out.

“Both Julie and I agree without God in this equation, we wouldn’t be here,” Hoover said of prayers by family, friends and churches.

“We’ve become all one family now,” he said of their two families.

This story was reported by The Daily Item in Sunbury, Pa.