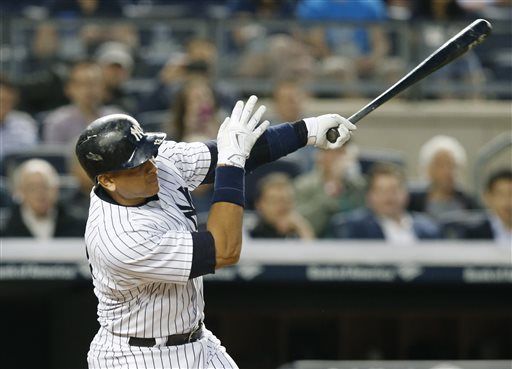 NEW YORK (AP) — Alex Rodriguez passed Willie Mays for fourth place on the career homer list, connecting for No. 661 Thursday night an at-bat after he was robbed of the milestone drive by a leaping catch.

The New York Yankees star hit a liner off Baltimore’s Chris Tillman into a secure area just to the left of Monument Park in center field in the third inning. A-Rod sent a soaring shot in the first that Delmon Young caught by reaching over the top of the wall in right field.

“Nobody will ever pass Willie Mays,” Rodriguez said after the Yankees beat the Orioles 4-3. “I talked about him being my father’s favorite player. There’s only one Willie Mays. Not only what he did on the field but what he meant off the field. He’s a legend and he’s also a role model for all of us.”

Next up for Rodriguez: Babe Ruth at 714 home runs.

The Yankees, who said they will not pay a $6 million bonus after Rodriguez matched the Say Hey Kid on Friday in Boston, put a message on the main videoboard saying, “661 Home Runs. Alex Rodriguez just surpassed Willie Mays for sole possession of 4th place on baseball’s all-time home runs list.”

The slugger pumped his fist as he rounded first base, and fans gave Rodriguez, who didn’t play last year while serving a drug suspension, a standing ovation as he was greeted warmly in the dugout by his teammates.

“It’s a lot of fun to be part of,” said Brett Gardner, who pulled off Rodriguez’s helmet. “I know there’s a lot of questions surrounding everything. Still, 661 home runs is a lot.”

Mark Teixeira stayed out of the batter’s box as the cheers swelled. Rodriguez was encouraged by the Yankees to take a curtain call, and he said he looked to manager Joe Girardi for reassurance that it was OK. Then, ever so briefly, the three-time AL MVP jumped to the top step and thrust both hands above his head.

“When you’re productive you re-earn their respect and they pull for you,” Girardi said of the fans.

Rodriguez, who turns 40 in July, moved into a tie for fourth in the AL this season with seven home runs.

The Yankees and A-Rod have a marketing agreement that calls for $6 million each for up to five achievements, payable within 15 days of designation by the team. But New York has said the marketing possibilities were ruined after Rodriguez served his performance-enhancing drug penalty for his involvement in the Biogenesis scandal.

No payment likely would trigger a grievance on Rodriguez’s behalf by the players’ union. Without a settlement, the case would be heard by an arbitrator.

“That’s not where my mind is right now,” Rodriguez said. “I’m really just trying to enjoy this moment.”

In this May 6, 2014 file photo, Bill Simmons arrives at the world premiere of “Million Dollar Arm” at El... read more