The weapons men and women most often use to kill 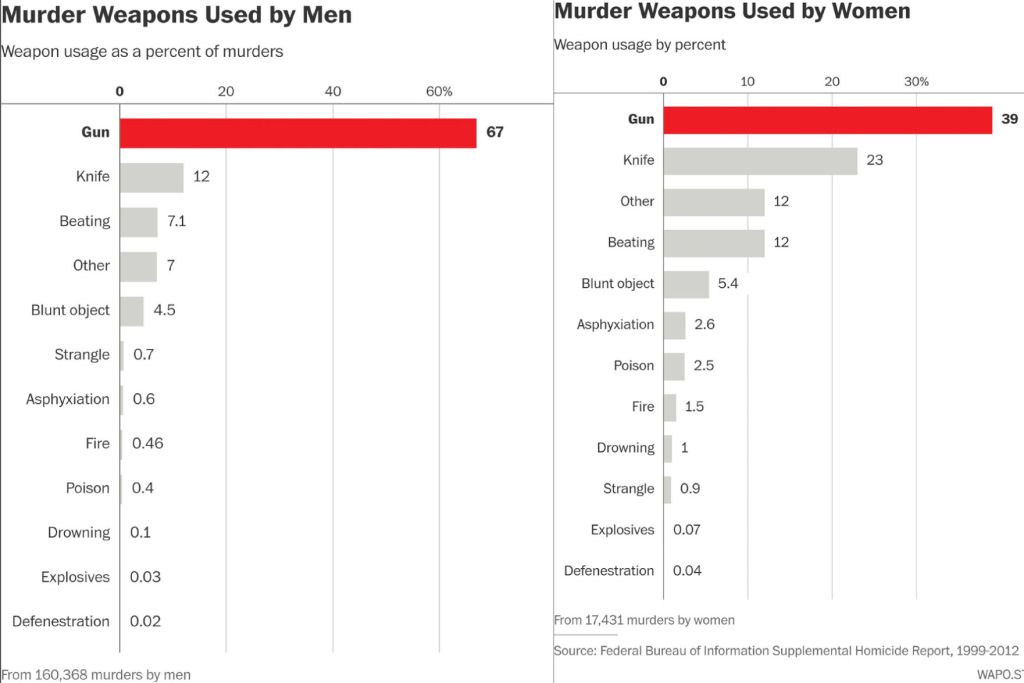 Even if I didn’t care at all about “Game of Thrones” — and we can pretend I don’t — I am still intrigued by the suggestion that poison is a woman’s weapon. Since I have access to the best data available on American murders, I could not resist delving into the question.

The Federal Bureau of Investigation Supplemental Homicide Report data from 1999 through 2012, the latest available, is imperfect but the best source with data on 195,578 murder cases, 209,000 dead and 240,000 killers.

The first thing to know is that men commit so many more murders than women — 90 percent of them — that every kind of weapon is used much more by the guys. But we can still review the weapon preferences of men and women separately. Men use guns two-thirds of the time.

Women use guns way less than half the time, although it still remains the most popular weapon among women. After guns, women are likely to use a knife, to beat their victim to death or to strike them with a blunt object. After guns, poison is the sixth most common way for a woman to kill.

Still, because men use guns for so much of their killing, and because women use guns much less frequently, it turns out that women tend to use every other weapon more than men. And so, yes, poison is more popular among women killers than it is among men.

Still, poison is not a very popular weapon. It is used in just under one-half of one percent of murders. That’s using a definition of poisoning that includes standard poisons, and also murdering with a poisonous use of narcotics or sleeping pills. It does not include poison gas, which the FBI lumps under asphyxiation.

Even with that tiny share, poison was still used in 901 murder cases listed in the data. The vast majority of cases involve one killer and one victim, and they knew each other well. Since a few cases involve multiple killers or victims, there are a total of 936 deceased and 1,108 offenders. That’s a big enough group to draw some fair conclusions about who uses it and who is killed.

Women are seven times as likely as men to choose poison as their murder weapon. As I said before, there are nine male killers for every one woman killer. So, in raw numbers, more men kill with poison than women do. But among men murderers, poison is used in just over one-third of one percent of killings. But for women, it is used in more than 2.5 percent of killings.

You can see a more nuanced version of weapon choices if you remove all gun murders by men and women — posing the question, “Other than guns, which weapons are used by men and which are used by women?” That provides a more mixed picture than “men are more likely to use guns and women are more inclined to use everything else.”

Without guns, men have greater preference than women for beating, blunt objects and strangling. Women are more prone to kill with stabbing, asphyxiation, poison, fire, drowning, explosives and defenestration.

Poisoning stands out, though. With all guns removed, women are almost four times as likely as men to use poison. It is used just over 1 percent of killings by men, and just over 4 percent of killings by women. The only other weapon with a bigger difference is drowning, used seven times as much by women (but used less than a third as often as poisoning, only 311 killers).

In the final analysis, men kill with poison more often. But it is the weapon of choice by women murderers much more than men, even if the male predilection for guns is removed. Yes, poison is a women’s weapon.

Further than that, it’s a weapon of white people.

And when you break out both the killer’s race and sex, you see white women are the most likely to be using poison when they kill.

The FBI data does not detail what poisons are used. But it also shows that older killers are more likely than young ones to use poison. Killers over 30 are more than twice as likely as younger killers to resort to poison.

Poisoning victims fall into a very different age pattern than killers. Poison is clearly used to kill the youngest and oldest victims more often than others. People in the age groups that suffer the most homicides — young adults — are less likely to be killed with poison.

The relationships between victims and their killers also reflects that tendency to use poison to kill young people. Daughters are the most common female relatives and sons are the most common males relatives murdered with poison. Poison is much more likely to be used in killings in which the murderer knows the victim, rather than between strangers. And the gender pattern remains: Poison is used in more than 2 percent of husband-killings. But it is used in just over one-half of one-percent of wife-killings.