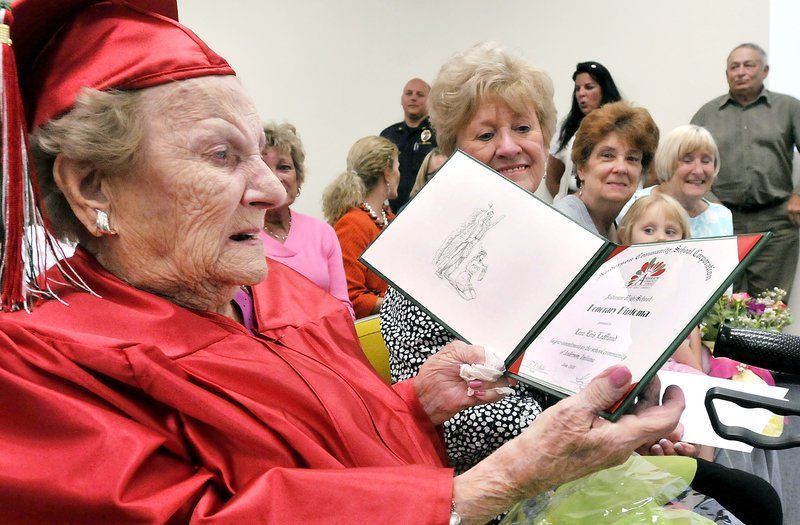 ANDERSON, Ind. — A Florida woman dabbed at her eyes Tuesday night as she received a diploma 82 years in the making.

Back in 1933 Lora Lois LeMond White Hardy was a senior at Anderson High School.

The oldest of eight children, Hardy had just four credits to earn for graduation when she was forced to quit school.

It was the height of the Great Depression, and she went to work for General Motors to help support her family.

At the Anderson Community Schools board of trustees meeting, Hardy, now residing in Florida, was sitting in the front row of the district hearing room ready to receive her diploma.

Normally, of course, graduates walk to a dais to receive their diplomas, but in a respectful break with that tradition, Superintendent Terry Thompson delivered it personally.

“She has stated that her biggest regret in life is that she was not able to complete high school and earn her diploma,” Thompson told the Anderson (Ind.) Herald Bulletin.

Finally receiving it Tuesday was something of a birthday present from Hardy’s family.

During the 1940s, Hardy, who had four children of her own, helped organize a school lunch program at Valley Grove Elementary school to support children who were going hungry.

In addition to working at General Motors, Hardy and her first husband, Francis White, built and sold 17 houses in the Anderson area. During a four-year layoff from General Motors, she studied and became a beautician.

She eventually retired from General motors after more than 40 years in 1976.

“I lacked four credits when my dad got sick,” Hardy said after receiving her diploma. “I got a job at Delco, and that was about as good as you could hope for back then.”

She worked on an assembly line making car horns.

Hardy said she had no idea there would be such a ceremony associated with receiving her diploma. She said she might not have come if she’d known.

“I knew I was going to get the diploma, but I had no idea it would be all this,” Hardy said.