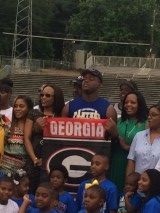 AMERICUS – Americus-Sumter High School defensive tackle Tyler Clark made a verbal commitment after the spring game on May 15 to play football for the University of Georgia Bulldogs. Clark, a 6’3” 230-pound junior, committed to the 2016 UGA football program after carefully considering offers from many other SEC schools.

Clark made the verbal commitment, but said that he still plans on making some recruiting trips during his senior year.

Amid the celebratory cheers of a crowd of friends and supporters, Clark told the Times-Recorder that he chose to commit to UGA despite having been offered positions in several other very strong football programs, saying “The reason that I chose to commit to UGA is because it will be easy for my family to travel to the games and, when I visited the school, it just felt like home.

Clark has been carefully considering his options for some time.

He began to garner attention as a strong prospect for recruitment after turning some heads with his performance at the 2014 Rising Senior Bowl in December.

When asked how he feels about gaining so much attention so quickly, Clark said “It doesn’t really get to me. All I think about is coming out here and playing my heart out every Friday night.”

Panther fans are sure to be excited about seeing this four-star recruit on the field during his senior year, next season!

He is the son of Tommy and Angel Clark, of Americus.