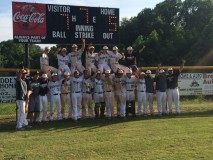 The Schley County Wildcats swept the GHSA class A championship series against the Emmanuel County Institute (ECI) Bulldogs to take the state championship in two games on May 16. Schley’s boys rolled over the Bulldogs 4-0 in the series opener before taking a hard-fought 7-5 victory in the nightcap to claim the first-place title amid the cheers of their hometown fans.

In the first game of the afternoon, Schley grabbed a shutout win; the type of win that the Wildcats’ fans have come to expect after such an impressive season. Wrapping up the season with a 25-5 overall record, Schley County’s supporters have become accustomed to seeing their favorite players come out on top.

Schley got off to a slow start in the second game of the afternoon, however, taking a 4-1 deficit into the top of the fifth inning. With one out in the frame, the Wildcats began a rally, sparked by a single off the bat of Reid Ragsdale. As Wildcat pitcher, Brett Usry, stepped up to the plate, Ragsdale took a chance and stole second base. Usry then hit a hit a single to left field, allowing Ragsdale to advance to third, before proceeding to steal second himself.

Ragsdale was tagged out heading home on a Michael Leeder single before Chase Patrick drew a walk to load the bases.

Clint Sellars picked up his bat with the bases loaded and two outs, knocking a single to plate Cameron Vanlerberghe, designated runner for Usry, and narrow the Wildcats’ deficit to 4-2.

Schley senior, Knox Theus, then smashed a double to bring in a pair of runs and tie the score 4-4, where it would stay until the top of the sixth.

The bottom of the fifth inning was highlighted by an exciting play in which a Bulldog batter nailed a line drive deep into right field with a runner in scoring position. The ball was picked up and launched to the wildcats’ second baseman, who then fired it off to Theus, waiting at the plate. Theus snagged the ball just in time to tag the Bulldog runner sliding into home and prevent the Bulldogs from retaking the advantage.

In the top of the sixth frame, Will Barry opened the stanza by drawing a walk. Josh Hutchens then set the Wildcats’ offensive tone with a single into the center field gap to advance Barry to second. Ragsdale followed with a sacrifice bunt to push the runners to second and third before Usry was handed an intentional walk, loading the bases.

With one out and the bases loaded, Leeder drilled a drive past second base to bring in Barry and Hutchens to the thunderous roar of the local crowd of supporters. Sellars then knocked another past second base, allowing Vanlerberghe to score on an ECI error and widen the gap to 7-4 before the Wildcats returned to the outfield.

The Wildcats held on tightly to their two-point advantage until the bottom of the seventh inning. ECI’s batters came out strong in the frame, determined to spark a late rally and force a tiebreaker in the series.

Bulldog fans exploded into applause when the team’s first batter stepped up to the plate and jacked a solo homerun to put a possible comeback within reach. The next hitter at the plate smashed a double into the right field pocket to keep the Bulldogs’ fans cheering and the Wildcats’ fans praying

Emmanuel County’s cheers were stifled, momentarily, as Schley’s relief pitcher, Chase Patrick, picked off their man on second as he attempted to get a lead off the bag but the Bulldogs kept on battling.

With a sea of red shirts supporting the Bulldogs along the third base line and another of white and black shirts along the first base line, barely a sound could be heard from the crowd as ECI’s final batter stepped up to the plate. With bated breath, the fans of both teams watched as the Bulldogs’ hitter swung his bat, knocking a grounder towards Patrick. The home team fans turned it up to 11 as the ball was tossed to first base, taking out the runner to wrap up the game, the series, and the season.

Celebrations erupted all around Wildcat Park, but no one was nearly as excited as the white-uniformed players in the diamond. As the Wildcats swarmed around their head coach, Chuck Cheek, and Schley’s coaching staff, any observer could see that this was a moment that would stay with them for a long, long time.

The Wildcats were presented a GHSA state championship trophy in a ceremony after the contest.

Cheek spoke with the media after the win, saying “We are all so appreciative of our fans and this community… We are out here doing what we love and these guys have worked so hard. They absolutely deserve this. I’m so proud of them.”

“We played well in the first game.” Cheek continued. “In the second game, we had some adversity early, but we had a good run in the fifth and tied the game. Our senior, Knox Theus, came through with a huge hit for us. Brett Usry settled down after the first inning and did an outstanding job of keeping us in the game and giving us the chance to come back. And Chase Patrick came in to close it out. We made plays when we had to, and got hits when we had to. This is just awesome…This is unreal!”

After unsuspectingly receiving his mandatory Gatorade bath from the team, Cheek continued. “They are really good baseball players, but they are even better young men… They take up for each other and they work hard all the time…These guys are all loaded with talent…”

On what Schley County fans can expect next season, Cheek said, “We lose [Schley senior] Knox Theus, and that’s going to be a huge loss, but we get everyone else back. It’s going to take a lot of hard work, but it sure would be nice to be back here again next year.”