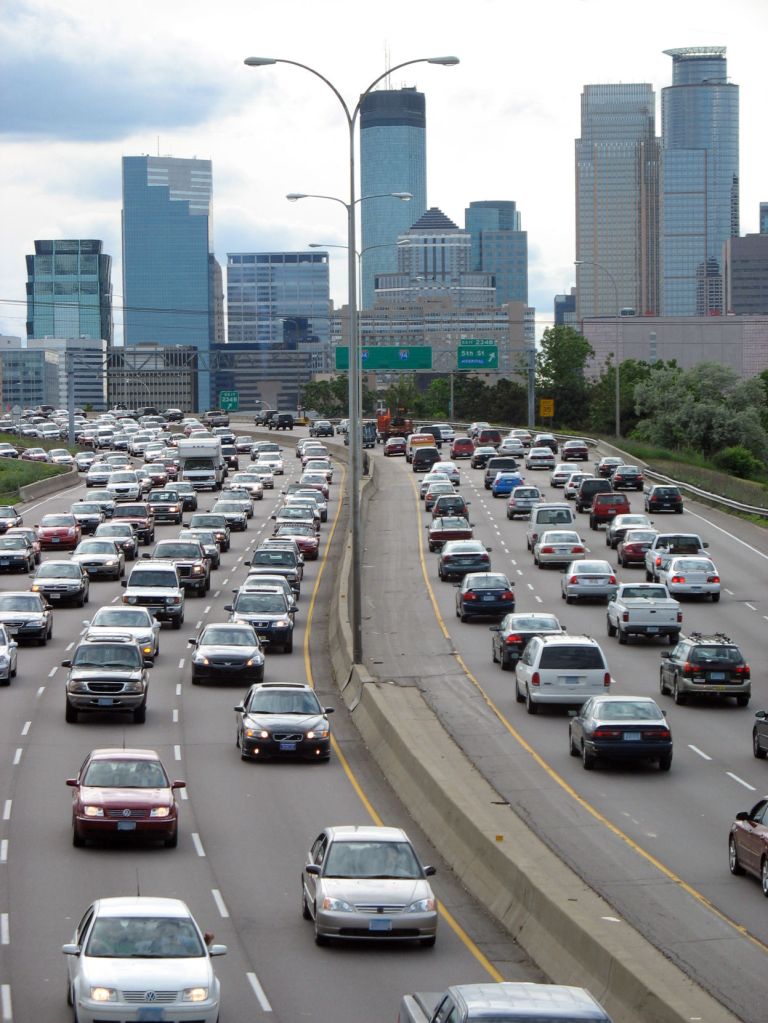 This Memorial Day weekend, nearly one-third of Americans will hit the roads. Congestion in major cities will increase 200 percent, and life satisfaction levels will plummet 50 percent. Actually, I just made all of those statistics up. Then again, the numbers you hear breathlessly brandished on drive-time radio in the run-up to the holiday are equally meaningless, based on randomly sampled surveys and historical forecasts. No one knows exactly how many people will travel this weekend, nor how bad the traffic will be. We can just assume: many, and worse than usual. As Americans sit congealed on a brake-light-bathed stretch of tarmac, there will be ample time to consider five myths about this problem of our own making.

This is the granddaddy of all traffic myths, one still held dear by the average driver and certain precincts of state highway offices. More funding for more roads is on the way in Texas, where the governor declared residents are “tired of being stuck in traffic.” On Memorial Day, it will assume the stature of an intuitive truth: If they just built more roads, we’d be home by now.

But that reasoning doesn’t stand. First, Memorial Day is one of a handful of peak travel days. “You don’t build a church for Easter Sunday,” as the saying goes. More broadly, whatever short-term gain that comes with capacity expansion is generally eaten up by longer-term behavioral shifts. As University of Toronto researchers Gilles Duranton and Matthew Turner describe what has been called the “fundamental law” of traffic congestion: “People drive more when the stock of roads in their city increases.”

Aren’t planners simply keeping up with population growth? Perhaps. Except that growth in vehicle miles traveled has consistently outpaced population growth over the past few decades. And as transportation researcher David Levinson has noted, U.S. roads are already bristling with spare capacity and inefficient use is rampant (such as too-large single-occupant cars all traveling to work at the same time on too-wide lanes). He argues that we should focus time and resources on using the highways we already have more efficiently, rather than on building more.

Speaking of efficiency, common sense says that when drivers are humming along at or even above the speed limit, highways are performing at their best. The German autobahn, with its (shrinking) speed-limit-free zones, is often offered as a shining example. It must be those slower drivers who are holding things up!

But as good as fast-moving roads might be for the individual driver, they are not the best for the most drivers. As data gleaned from in-pavement “loop detectors” on Washington state highways showed, those highways were able to achieve “maximum throughput” — pushing the most cars through one segment of road in a given time — at speeds that were roughly 80 percent of the posted speed limit of 60 mph. Why? At higher speeds, drivers need to allow more “headway” between vehicles, meaning more space is required per vehicle. And faster-moving traffic tends to break down more quickly, with more severe “shock waves”; it takes a lot longer to recover from a traffic jam than to get into one. I have been told, anecdotally, by traffic engineers that the left-hand “passing lane” can become congested first. (I’ll leave it to you to decide if karmic justice is at work there.)

In a “speed harmonization” experiment on Colorado’s I-70, the state highway patrol improved traffic flow by enforcing, via phalanxes of patrol cars, 55 mph speeds — thus preventing the instability caused by people driving fast into packs of congested, slower-moving vehicles.

3. Changing lanes will get you there faster.

“Discretionary” lane changes are a common feature of driving — one study found that drivers make one on average for every two kilometers. Finding yourself in a traffic jam, you may note that the lane to one side is moving faster. It is a terrible feeling, one that seems to warrant rash action. You tense at the wheel, wildly scanning the mirrors, enlisting your spouse to signal and barter out the window. Jerry Seinfeld riffed on this in a stand-up routine: “Yeah, come on over here, pal. We’re zoomin’ over here. This is the secret lane. Nobody knows about it.”

Relax. There is no secret lane. The seeming progress other people are making is often an insidious visual illusion, identified by Donald Redelmeier, triggered because we watch drivers pass us more often than we can possibly see ourselves passing other drivers — even when we are actually passing as many drivers as pass us.

And you probably just made things worse by switching lanes. As one study notes, lane-change maneuvers “not only contribute to traffic oscillations, but may even be a primary cause.” Your lane change disrupts the equilibrium of the packed highway, creating a momentary gap in your own lane that another driver, somewhere behind in another lane, will take as his cue to change lanes himself, causing yet more disruption. These drivers are winning the battle but losing the war.

4. Traffic jams can happen for no reason.

You arrive at a stalled queue of vehicles. Patiently you creep along, waiting to be rewarded with some explanation — an overturned big rig, a motorist with a flat tire, something that will repay your belief in a rational world. But there’s nothing but the expanding accordion of slowly reaccelerating traffic. Though he wasn’t talking about traffic, a phrase by Einstein seems most apt: “Spooky action at a distance.”

But there’s always a reason. It could simply be the grade of a hill, the brightness of the sun on the horizon, a driver who changed lanes too quickly and set off a ripple of instability. Benjamin Coifman, an engineering professor at Ohio State University, offers a simple explanation for this. Imagine pouring water into a bucket with a hole at the bottom. Suddenly, the hole is blocked for a minute. The water starts rising (that’s the traffic jam). Then the hole is unblocked. Even though water is draining again (i.e., traffic is flowing), the new water is still slow to reach the hole. That the bottleneck is no longer visible doesn’t mean it wasn’t real.

5. Memorial Day is an especially dangerous time to travel.

Along with dire traffic predictions, special safety warnings about the perils of holiday-weekend travel have been a Memorial Day guarantee, from a 1938 headline warning of “holiday dangers” to the Chicago Tribune declaring last Sunday: “Memorial Day weekend expected to open deadlier summer road travel season.”

Memorial Day, as research by the National Center for Statistics and Analysis notes, is indeed one of the deadliest days for vehicle occupants, behind New Year’s Day, Labor Day, the Fourth of July and Dec. 23. But as a study by the Insurance Institute for Highway Safety found, any Saturday in a car is dangerous. From 1986 to 2002, 117 people on average died on highways on any given day. That number increased to 161 on the Fourth of July, making it only slightly more dangerous (with many more miles traveled) than the typical Saturday, for which the average was 158. Holiday warnings and added enforcement may keep the death toll down, but they may also give drivers an unjustifiably heightened sense of safety on “normal” days.

Vanderbilt is the author of “Traffic: Why We Drive the Way We Do (and What It Says About Us).”