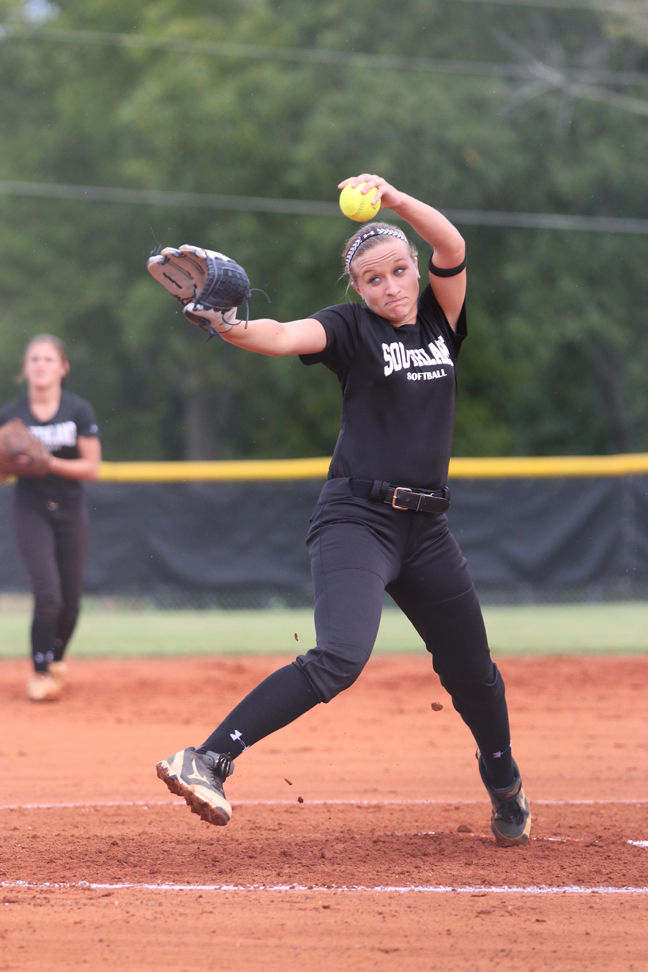 Lady Raider pitcher, Megan Burke, turns up the heat in the team’s region match against the Terrell Academy Lady Eagles.

After wrapping up last season with a 20-2 overall record and a third-place finish in the state, the Southland Academy Lady Raiders have begun the 2015-16 season poised to continue the program’s tradition of stiff competition.
Prior to the begining of the season, the team proved their skills on the diamond with a pair of victories over the Piedmont Academy Lady Cougars in an August 1 tournament. Immediately after the tournament, the Lady Raiders set to honing their game in preparation for the team’s season opener against the Valwood Lady Valiants in Americus on August 10.
Local softball fans would have to wait to see the team in action, however, as the game was rained out early in the first inning.
Fans didn’t have to wait for long, though. The Lady Raiders traveled to Camilla to face Westwood on August 13.
The Southland girls brought home a whopping 16-1 win in four innings in this season’s default region opener against the Lady Wildcats.
“It was a good game,” said Lady Raider head coach, John Brady. “We jumped out early and scored four or five quick, legitimate runs and then [Westwood] started making some mistakes.” The Lady Raiders scored 11 runs in the first inning.
Christina Davis paced the team’s offense, hitting two for two in the match, scoring three runs, and bringing in one RBI. Brandi Sellars batted one for two with four runs scored and two stolen bases. Megan Burke hit two for three with a double and three RBIs. Olivia Perry brought in two RBIS, hitting one for two.
Burke was also the winning pitcher, with eight strikeouts and no walks. Burke allowed only two hits during her work on the mound.
“[Westwood has] a young team, Brady told the Times-Recorder. “They graduated about six or seven girls off their team last year.”
“It was a good game for us on our end,” he continued. “Megan threw strikes and we made only one error. We got that first region win, which is always important.”
The Lady Wildcats made the playoffs last year, but were eliminated in the first round.
On August 18, the Lady Raiders continued their road trip, traveling to Dawson to face Terrell Academy. The team continued their region domination with a 9-1 win over the Lady Eagles.
“Christina Davis had another huge day,” Brady said on the game. “She was three for four with four RBIS, a double, and a sacrifice fly.”
Sellars hit 0 for two, but reached base three times, scored three runs, and stole one base. “She walked twice” Brady added. “Both of these times, she had two strikes and drew a walk. The second time, she took an 0-2 count and drew a walk off of it.”
She was also hit by one pitch. “She had a good game,” he said.
Savanna Swan hit three for five, scored three runs, and brought home two runners.
“I was really pleased with the way we played this game,” said Brady. “We only made one mistake. Terrell’s pitcher is very good and, our first time through the order, we struck out five times. After that, we struck out six times through the rest of the game. We made some good adjustments and did a lot better at the plate.”
The game lasted all seven innings.
Burke was the winning pitcher again. She contributed 10 strikeouts and one walk. She gave up only four hits. “She had a really good game again,” Brady said. “Megan threw well. It was a well-played game.”
In the bottom of the sixth, with the Lady Raiders ahead 8-1, the Lady Eagles threatened a rally which could have turned the tide of the contest.
With runners on first and second and only one out, one of the Lady Eagles’ batters hit a low line drive to Caitlyn Smith at first base. Smith caught the ball and stepped on the base before the Terrell runner could get back, ending the inning.
“It was a nice play,” Brady said. “The game was still in hand, but if Terrell had hit a double and scored those two runs, they would have made it 8-3 with a runner at second. That would have made the game a lot more dicey. That was a big play for us to stop that rally they were starting.”
“Other than that, with ten strikeouts there weren’t too many chances to make big plays,” Brady concluded.
The Lady Raiders were scheduled to face the Deerfield-Windsor Lady Knights on August 20 in Americus, but the game was called due to inclement weather. Southland will host the Southwest Georgia Academy Lady Warriors on August 25 before hosting the Tiftarea Lady Panthers on August 27.