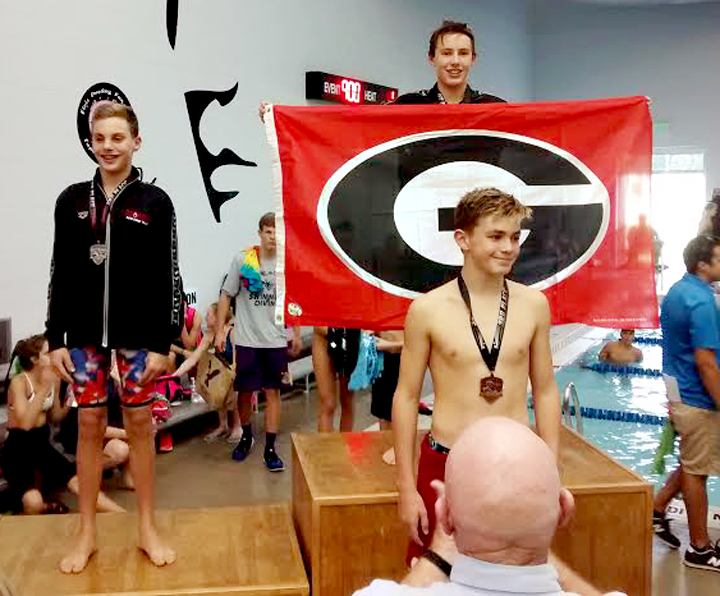 TUPELO, MS – Blue Tide swimmers, David Murphy and Antony DeMott, returned from the USA-Swimming Southern Zone Championships in Tupelo, MS with a number of gold medals. The tournament was held on August 4-8. The pair of local swimmers represented a Georgia all-star team in the eleven-state competition, which showcases many of the top age-group competitive swimmers in the nation.
In the closest team race in USA-S Zone history, Georgia placed second to Florida, 824 to 809. North Carolina picked up a third-place win with 780 points.
Murphy and DeMott did their part for the Georgia Squad, with Murphy winning the 15-18 boys 100-meter freestyle with a time of 52.89. DeMott grabbed wins in the 11-12 boys 50-meter freestyle with a time of 25.93 and the 100-meter freestyle with a time of 57.22.  Murphy added a silver medal in the 50 free with a time of 24.13, as did DeMott in the 100 butterfly with a time of 1:02.54.
Murphy also had a hand in Team Georgia winning three out of four relays in the 15-18 boys age group. DeMott led the 11-12 boys 200-meter freestyle relay to a Zone meet record, and a win.
DeMott has started preparation for his first meet of the short course season, along with the rest of his Blue Tide teammates. He finishes the season ranked third in the nation in the 50-meter freestyle among 11-12 year old boys.  Murphy, who swam at the Junior National Championships in December, is turning his sights toward NCAA competition. He leaves for the University of Wyoming in mid August, and will compete as a sprint freestyler and breaststroker for the Cowboys.David Murphy, rear, wears his gold medal after the 15-18 year-old  boys 100-meter freestyle awards ceremony.