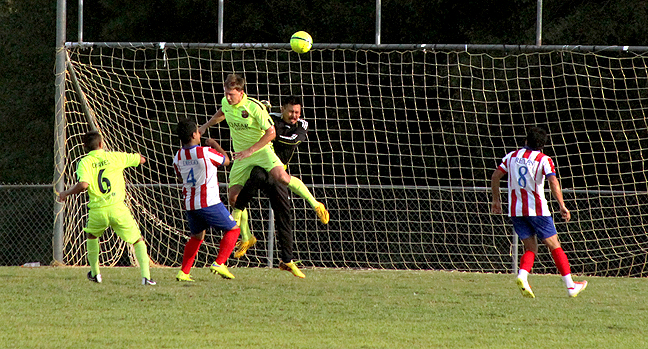 Members of the Americus team scramble to get the ball in Vienna’s goal as the Vienna goalkeeper fends off their attacks. Americus won the championship match 3-2

AMERICUS – Last weekend, four teams in the The Americus Soccer League took to the pitch for one last time this season. After a long, hard-fought summer, the top-four teams met in a final showdown to determine the league’s champion team on August 23 at the Sumter County Recreational Complex in Americus.
The Chupacabras and the Jaguares took the field first to battle for third-place honors. The Jaguares withstood a surge from the Chupacabras late in the second half to deal their opponents a 2-1 defeat and take third-place honors on the season. The Chupacabras wrap up the year in fourth place.
Americus then took the field to put their soccer skills to the test against Vienna in one of the most competitive contests that the field has seen all summer.
Vienna entered the match with an undefeated record. Americus, who had previously suffered two losses on the season, spoiled Vienna’s streak with a 3-2 win, grabbing a solid a first-place finish on the year.
With the loss, Vienna concludes their season in second place.