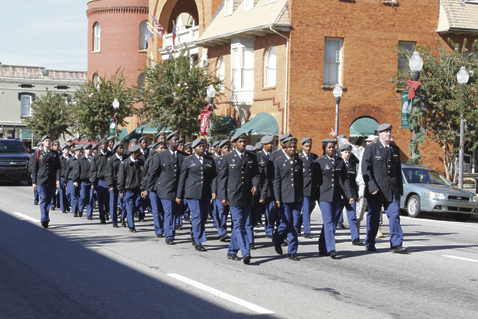 A scene from the Veterans Day Parade in 2014, in downtown Americus, organized by American Legion Post 558, Americus.

AMERICUS — American Legion Post 558, Americus, is making plans for its second annual Veterans Day Parade to be held on Nov. 11. Frank Mitchell, parade chairman/organizer, said the event will be even bigger this year.
“The 2014 parade turned out a large community of people from Americus and surrounding counties as well as an Air Force officer from France,” Mitchell said, adding that the officer from France will return again this year.
This year’s grand marshal is one of Sumter County’s own: Brigadier Gen. Thomas J. Carden Jr., assistant adjutant general, Army, Georgia Department of Defense, and commander, Georgia Army National Guard.
Carden, an Americus native, graduated from Americus High School and  Georgia Southwestern College in Americus with a bachelor of science in history. He later earned a master of arts in human resource management from Webster University in St. Louis, Mo., and a master of science in strategic studies from the Army War College.
In 1986, Carden enlisted in the Georgia Army National Guard as an infantryman. He was commissioned as a second lieutenant in August 1989, after completing officer candidate school through the Georgia Military Institute. His military education is extensive.
Carden has held a number of key positions in the Georgia Army National Guard; most recently as the chief of staff and previously as the deputy chief of staff for operations. He served in command positions in deployments to Bosnia, Herzegovina and in Iraq. His military decorations include the Legion of Merit, the Bronze Star Medal, the Meritorious Service Medal, the Army Commendation Medal, the Army Achievement Medal, the Army Reserve Components Achievement Medal, the National Defense Service Medal, the Armed Forces Expeditionary Medal, the Humanitarian Service Medal, the Armed Forces Reserve Medal, the Parachutist Badge and the Combat Infantry Badge.
In his current position, Carden is responsible for directing, coordinating, organizing and stationing the Georgia Army National Guard to ensure readiness to perform state and national missions.
Frank Mitchell said Post 558 is seeking other military officers who came up through the local school system. He said these individuals will be invited to speak to and interact with members of the Americus Sumter High School JROTC on Veterans Day. He said officers from any branch of the military are welcome.
Post 558 invites all military personnel, whether active, reserve or retired, to participate in the parade and be honored as veterans. Schools and civic and social organizations and others are also invited to participate in the parade. Line-up begins promptly at 10:30 a.m. at the Sumter County Courthouse before marching through downtown Americus.
Mitchell said downtown businesses are asked to place a red, white and blue bow in their downtown window to show support of veterans.
To participate in the parade, contact Frank Mitchell at birdfllowerfruit@yahoo.com or 229-938-4310 or P.O. Box 6775, Americus GA 31709.