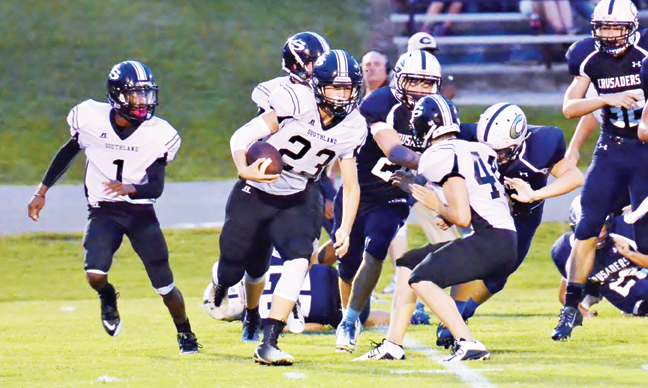 Parker Weldon (23) takes off around RTCA’s defensive line as Jamaal Rice (1) and Morgan Youngdale (44) get in position to block in the Raiders’ August 28 match against RTCA.

SOUTHLAND:
The Southland Academy Raiders traveled to Lyons on August 28 to face the Robert Toombs Christian Academy Crusaders on the gridiron for the team’s second non-region match of the season. The Raiders fell 32-6 in the match.
Bringing at least seven seniors and eight juniors to the field, the Crusaders took advantage of their abundance of hardened, experienced players to gain the significant victory. The Raiders ran into difficulty early in the match, with the Crusaders monopolizing on this experience to grab an early lead that they would hang onto for the duration of the game.
The Raiders finally saw their opportunity to avoid a shutout late in the fourth quarter after sophomore, Jamaal Rice, capped off a seven-play, 78-yard drive with an 18-yard run that didn’t stop until he reached the goal line.
Junior, Stephen Turton, paced the Raiders on the ground in the match, gaining 64 yards on 16 rushes. Rice added another 58 yards on five attempts.
Senior, Josiah Copland, brought down three receptions for a total of 34 yards, but freshman, Parker Weldon, was the major yardage contributor through the air with 50 yards gained on two completions. Rice contributed 20 yards on two receptions and Turton tacked on another 11 yards on a pair of catches. Sophomores Brody Shattles and Townsend Ray each brought down one pass for slight yardage as well.
Sophomore quarterback, Alex Roach, connected on 12 of 19 attempted passes, for a total of 123 yards in the air. Another 115 rushing yards brings the team’s all-purpose yardage total to 238.
The Raiders will take a well-deserved break this weekend and have one more non-region game scheduled before the real action begins.
On September 11, another young ball club, the Southwest Georgia Academy (SGA) Warriors, will travel to Americus to battle the Raiders on Harvey-Simpson field. This should prove to be a good match-up as the teams are similarly sized and will be bringing a comparable amount of experience to the game. The Raiders gained a 42-3 win over the Warriors last season and have won two of the schools’ last three matches.
The Raiders open region play on September 18, facing longtime foes, the Terrell Academy Eagles, in Americus. The Raiders have won their last five matches against the Eagles and seemed poised to keep the streak intact.

SCHLEY COUNTY:
The Schley County Wildcats have been eagerly anticipating the team’s upcoming season opener. The long wait is nearly over for Elaville football fans, as the Wildcats will take the field to face a familiar foe, the Baconton Charter School Blazers, at home on September 4.
The Wildcats opened their 2014-15 season with a 44-21 win over the Blazers and will certainly be looking to repeat the performance as they kick off this season.
The Blazers surely will not prove to be pushovers for the Wildcats, however, as the team has at least nine returning seniors on board that have likely not forgotten the pounding that they received at the onset of last season. Schley’s boys, with their young roster, will need to be cautious to ensure that the action does not get skewed in the more experienced team’s direction in their season opener.
When the Wildcats return to the gridiron after this match, the boys will summon up their skill and determination before opening region play against the Greenville Patriots on Sept. 11 in Greenville. The Wildcats are 2-3 in the team’s last five contests against the Patriots and will be looking to equalize the record upon beginning region play.
Schley’s boys will then return to Ellaville on Sept. 18 to continue region competition against the Taylor County Vikings. 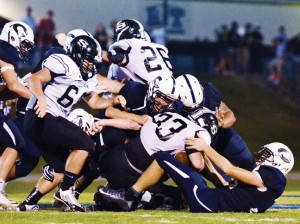 Josiah Copland (26) and Mitchell Goodin (66) try to keep the Crusaders’ defenders off of Stephen Turton (33) in the Raiders’ August 28 contest against RTCA in Lyons.

Ladarrius McCrary (45) and Tyler Clark (17) close in to help their teammate take down the Bulldogs’ quarterback, K’hari Lane, in the Panthers’ August 28 match against Macon County in Montezuma.

AMERICUS-SUMTER:
Spectators at last Friday’s Americus-Sumter (ASHS) Panthers match against the Macon County Bulldogs may have noticed that, once the Americus squad got warmed up and got over their nerves, they played pretty well. After a very tough first quarter, in which the Bulldogs pulled in 28 points, the Panthers spent the next 36 minutes posting 33 points of their own and holding their Macon County hosts to only 20.
On the heels of this tough loss to the Bulldogs, the Panthers will look to bring the team’s two-game skid to a halt with a win against the Shaw Raiders in Americus on Sept. 4.
Despite entering the match with a 1-2 record, Shaw will certainly bring tough competition to Finklea-Robinson Stadium, as the team is currently traveling with 22 long-time players. In their only match-up in recent memory, the Shaw Raiders dealt a 24-20 defeat to the Panthers last season.
ASHS opens region play on Sept. 11, facing the Thomas County Central Yellowjackets in Americus. Despite traveling with 19 returning seniors, the Yellowjackets are a fairly young team with a good many underclassmen on the roster. This fact should bode well for the Panthers who, generally, compete well against similarly-sized opponents, provided they find their footing early in the game.
Last season, the Yellowjackets took a 20-12 win over the Panthers, and spectators can be certain that the Americus team will be rigorously preparing to turn the tide of this year’s match in the Panthers’ favor.
The Panthers will continue region play on Sept. 18, making the trip to Albany High School to take on the Indians.