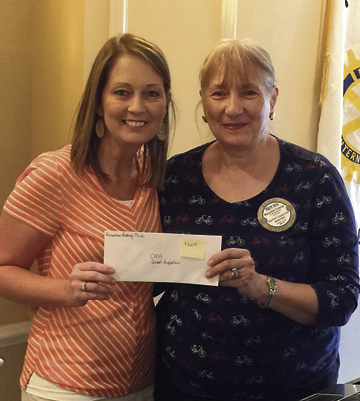 AMERICUS — Stephanie Bennett, program director for the Southwest Georgia Court Appointed Special Advocates (SOWEGA CASA), spoke before members of the Americus Rotary Club at their regular lunch meeting on Aug. 4. Bennett talked to Rotary about the purpose of SOWEGA CASA, giving Rotarians an overview of her organization and how it was originally established to serve the Southwestern Juvenile Court Judicial Circuit which covers Crisp, Lee, Macon, Stewart and Sumter counties. She explained that in order for a CASA chapter to exist, the local juvenile court judge – in this case – Judge Lisa Rambo – must invite CASA to establish itself in the community. Bennett explained that because SOWEGA CASA was asked to do so, its jurisdiction is now expanded to include the Cordele and Pataula Juvenile Court Judicial Circuits.
CASA’s mission, Bennett told the Rotary members, is to develop and support court-sanctioned, community-based affiliate programs that provide trained and supervised volunteers to advocate for the best interests of abused and neglected children involved in juvenile court dependency proceedings. She told Rotary that SOWEGA CASA, is a local chapter of the national volunteer-based CASA organization, serving children who are currently in the custody of the juvenile court systems in the communities of Ben Hill, Crisp, Dooly, Lee, Macon, Randolph, Schley, Stewart, Sumter, Terrell, Webster and Wilcox counties. She talked about the need for children in the custody of the juvenile court systems in these communities to have caring adults to advocate on their behalf, saying that children without a CASA assigned to their case often have no one who can talk to authorities about their needs, saying and that a CASA volunteer becomes the child’s voice.
At the meeting, Rotary President Mary Ann Crowley, presented Bennett with a check representing donations that the Rotary Club has collected over the past year. The money donated by club members was collected to be used to purchase school supplies for children brought into custody during the coming school year. SOWEGA CASA already has funds available to outfit children who are in care at the beginning of the school year but does not have the funds necessary to purchase school supplies for children who come into care after the start of the school year. Bennett explained that most often children aren’t able to bring their personal belongings – if they have any – with them when they are removed from their homes and placed in foster care because they are being abused and/or neglected.
Rotary plans to collect money from its members each month during the school year in order to provide CASA with funds to use for school supplies for children who become wards of the courts in the future.