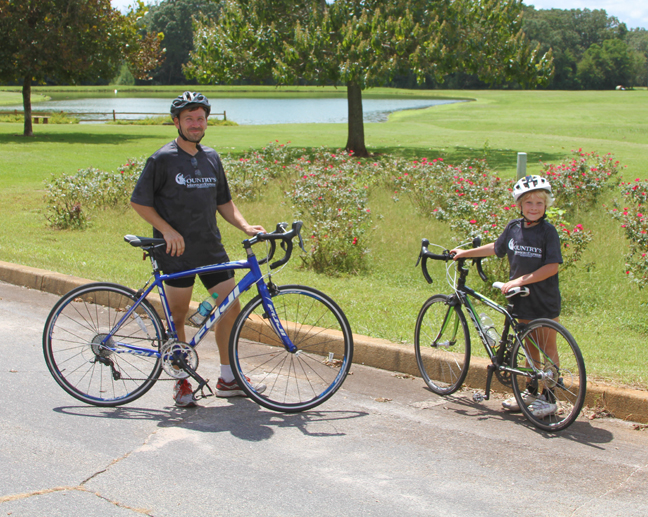 Christian “Goose” Lockhart (right) poses with his father Danny Lockhart (left) at the conclusion of the event’s final fifty-mile ride.

In collaboration with Sumter Cycling and the River Valley Regional Commission, the National Park Service celebrated a “Find Your Park” centennial event during the weekend of August 28-30, with a two-day bike ride through both Jimmy Carter and Andersonville National Historic Sites. In addition to highlighting the area’s two national parks, riders in the event were given the opportunity to visit three state parks as well, including Providence Canyon State Park, Florence Marina State Park, and Georgia Veterans State Park.
The rest stops along the ride route were designed to give the riders time to explore many of the county’s national treasures, including Andersonville National Cemetery, the National POW museum, and the Plans High School, and The Jimmy Carter boyhood farm.
The 100-plus mile cycling event attracted 40 avid cyclists, ranging in age from eight years old to well over 60 years old, who came from all over Georgia to participate.
The youngest rider in the group, by far, was a very energetic eight-year-old named Christian “Goose” Lockhart. An avid runner and swimmer from an early age, Goose took on his first century ride (100 miles) less than a year ago and has been an avid cyclist ever since.
Goose and his parents came to Sumter County from Geneva, GA to participate in the ride. After riding over 50 miles on August 29, the group returned home so that the young athlete could participate in a 5K run before heading back to Sumter County on the 31st to finish the ride.
Goose spoke with the Times-Recorder after completing the event and offering up a high-five to the newspaper’s representative, saying that he had had a great time and that his favorite part of the ride was when he had the chance to “go really fast down the hills.”
Julio Portillo, a member of the River Valley Regional Commission who helped to organize the ride, said “The ride exceeded our expectations. The last time we did this, we had about 23 paeople take part and this time, we had around 40. Everyone had a great time and just loved the rural scenery”
“There is a girl from California here that told us that she couldn’t believe that she got to visit two national parks by bike on the same weekend.”, Portillo continued. “That’s really cool. I like it when people come down here and get a chance to see what we have to offer.”
Margarita, the individual that Portillo mentioned, who was visiting from California, agreed to a brief interview at the ride’s conclusion. Asked if she had enjoyed the ride, she said, “I did. It was extremely challenging, but beautiful.” She went on to say that this was her first attempt at a century ride.
On how she decided to take part in the event, Margarita said, “I was looking at a couple of community calendars and I found this one… I wanted to have a productive summer while I’m here in Georgia. I’ve been here for about three weeks. I was looking for something fun to do and this seemed like the perfect thing. Camping in the summer… Why not?”
George Ellis, one of the representatives from Sumter Cycling at the event added, “Everything went very smoothly. There are a lot of moving parts in a project like this that can go wrong…We think that everyone was happy. We were very lucky with the weather. We got rained on a little [on Sunday] but it wasn’t bad.”
Another avid cyclist, Nancy Wylie, traveled from Atlanta with her friend, Larry Kloet, to participate in the event and see the local attractions. “I thought the ride was absolutely fantastic,” she said. “I had never been to Plains before. We got to visit the Plains High School. Then, we went over to Florence Marina, another beautiful place that I had never been before… The next morning, we rode back and got on the SAM shortline. The SAM Shortline has been on my list of things that I want to do for, probably, 20 years… The routes and roads were wonderful and the support was wonderful.”
Wylie continued to sing the praises of the event’s setting and support staff, saying, “They had rest stops set up along the road sides with provisions for the cyclists.”
“The first day was supposed to be the really bad weather day,” she added. “They were making provisions, asking themselves, ‘What can we do if the weather gets really bad?’ Today was the day we had the rain and people were driving by us, making sure that everyone was okay. I would not hesitate to recommend this ride to anybody.”
Wylie told the Times-Recorder that she had not previously participated in any rides with Sumter Cycling, but will definitely be looking for more of them.
The RVRC will be sponsoring the Fair On “The Square Carter Butts Memorial Ride” in Lumpkin on October 17. This cycling event is intended to raise money for the Stewart County Historical Society. “It’s a good ride,” Ellis said.
Sumter Cycling will be involved with the upcoming Tour de Farm ride as well, which will be held in Columbus this year on the weekend of Oct. 30-Nov. 1. 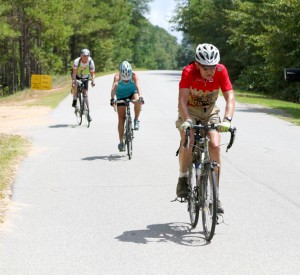 Cyclists, Larry Kloet (front) and Nancy Wylie (rear), along with another rider, depart the Bison Valley Lodge rest stop and make their way to Plains in the ride’s final stretch on August 30.