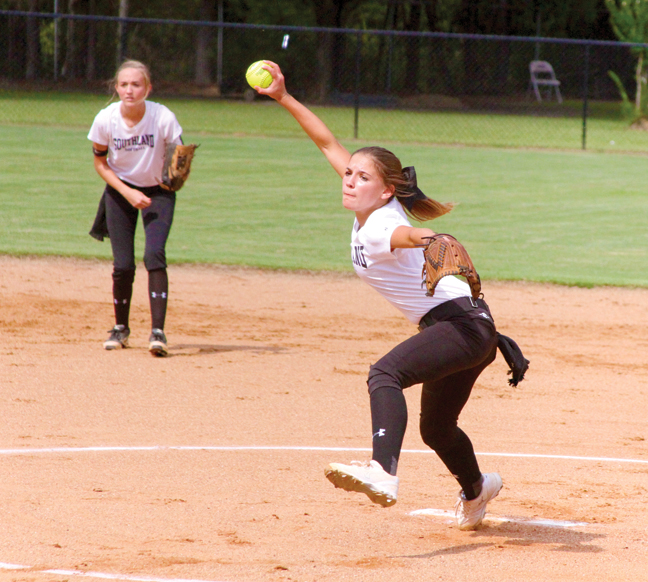 Savanna Swann lauches a fastball as Brandi Sellars watches intently from the shortstop position in the first inning of the Lady Raiders’ match against Westfield.

The Southland Academy Lady Raiders gained a huge 15-1 road victory against Brookwood on Sept. 1 in Thomasville before returning to Americus on Sept. 2 to host the Westfield Wildcats.
The Lady Raiders ran into trouble in their second match of the week when Westfield’s Brooke Knowles belted a grand slam in the first inning to give the Lady Hornets an early lead, which helped lead the team to an 8-3 defeat of the Southland crew.
The Lady Raiders went back on the road the next afternoon, heading to Valdosta to battle the Valwood Lady Valiants. The Lady Raiders kept their away-game winning streak alive at  the conclusion of the match, dealing the Lady Valiants a 9-0 thrashing. At the conclusion of the week’s contests, the Lady Raiders improve to 5-2 overall, with the team’s region record holding strong at 5-0.
Leading into the four-inning, 15-1 triumph over the Lady Warriors in the first contest of the week in Thomasville, the Southland girls got the scoring started early in the match. The team posted one run in the bottom of the first before Brookwood equalized the score at the top of the frame.
Upon returning to the dugout, The Southland girls proceeded to rack up five more runs in the second inning, followed by four more in the third and another five in the top of the fourth. Strong defensive play from the Lady Raiders kept Brookwood from crossing the plate for the remainder of the game and the match was called at the conclusion of the fourth inning.
Megan Burke pitched all four innings for the Lady Raiders, gaining five strikeouts.
Christina Davis paced the Lady Raiders’ offense, bringing in five RBIs on two hits. Abby Dent brought in two runners on a pair of hits and Olivia Perry brought in one.
Southland gained seven hits in the match, holding Brookwood to only three.
The Lady Raiders then returned to their home diamond the next afternoon to face Westfield.
As Westfield traveled to Americus for the first time this season, the team surely had not forgotten the fact that the Lady Raiders eliminated their team in last season’s elite-eight playoffs, dealing the Lady Hornets an 8-1 defeat before closing out the series with a 10-6 win. Westfield’s determination to avoid a repeat performance was evidenced by the Lady Hornets’ hard, gritty play throughout the game.
Westfield stepped up to the plate in the top of the first, quickly drawing a pair of walks before the team’s fourth batter was plunked by an errant pitch, loading the bases. Knowles then picked up her bat and, with a powerful swing, landed the ball beyond the Lady Raiders’ reach across the left field fence. Southland’s Savanna Swann, on the mound, then quickly sent the Lady Hornets into the field with a pair of strikeouts.
On Southland’s first turn in the dugout, Swann laid down a strategic bunt to advance to first base before Davis knocked a double, advancing Swann to third. Dent then nailed a bouncy grounder into the outfield for a single, bringing in Swann and Davis, and narrowing the team’s deficit to 4-2.
Westfield’s batters added two more points in the second frame off of a dropped pitch and an RBI brought in by Madison Boire before holding the Lady Raiders to only four at-bats in the bottom of the inning. The Lady Hornets added one more run in each of the following two innings, bringing the team’s total to eight points, where it would stay until the end.
Southland’s girls struck again in the bottom of the seventh, when Burke’s long drive into right field brought in Swann, bringing the game’s final score to 8-3.
Three different pitchers took the mound for the Lady Raiders in the match. Burke pitched 4.2 innings, gaining three strikeouts and Swann struck out two batters in her inning on the hill. Cassi Bass pitched the remainder of the game.
Dent brought in two RBIs on a pair of hits for the Southland girls and Burke brought in one. Davis gained two hits as well.
The Lady Raiders gained eight total hits in the game, while Westfield hit nine.
On Sept. 3, the Lady Raiders headed to Valdosta to defend their away-game wining streak against the Lady Valiants.
The first two innings went scoreless for both teams before Southland’s girls broke out in the top of the third, bringing in a quick four runs. Southland added two more in the fourth and another three in the sixth before the game was called at the conclusion of the sixth inning, giving the Lady Raiders their fifth region win of the season.
Burke pitched 5.1 innings in the match, with Brittney Tyler throwing the other two outs. Burke managed six strikeouts in her time on the hill and Tyler gained one.
Davis and Swann led the Lady Raiders’ batters with two hits apiece. Davis brought in three RBIs on her two successful at-bats. Dent’s one hit of the game allowed three Lady Raiders to cross the plate. Sellars brought in one RBI as well. The Lady Raiders gained six hits total and gave up only one.
Southland’s girls return to action on Sept. 8 in Americus, hosting the Westwood Lady Wildcats. The Lady Raiders previously defeated Westwood 16-1 on august 12.
The team will then host the Terrell Academy Lady Eagles on Sept. 10. Southland’s girls are 1-0 against Terrell Academy this season after dealing them a 9-1 loss on August 18. 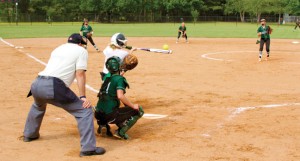 Hannah Philpot connects with a high pitch to slug a hard line drive into left field after racking up a full count in the bottom of the second inning of the Lady Raiders’ Sept. 2 match. The hit resulted in a single for Philpot.