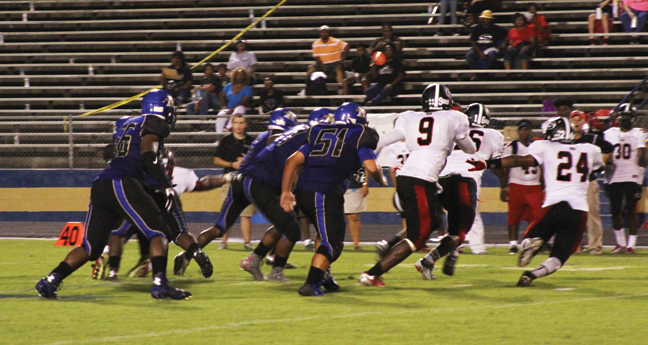 ASHS offensive linemen take try to make a hole for a Yancie eeper in the second quarter of the team’s Sept. 4 match against Shaw.

AMERICUS – Americus-Sumter Panthers took the field on Sept. 4 for the team’s third non-region match of the 2015 season.
The Panthers continued the gridiron action at home against the 5-A Shaw Raiders of Columbus. Americus-Sumter grabbed a 65-49 win in the action-packed match, stopping the team’s two-game skid and improving the team’s overall record to 1-2.
The Panthers opened the scoring after Kobe Lewis picked up a fumble and ran it back 58 yards. ASHS quarterback, Mekall Yancie, followed up with a two-yard keeper into the end zone. Tony Vargas then kicked a successful PAT to put the Panthers ahead 7-0.
Shaw quickly answered with a 28-yard touchdown run by quarterback, B. J. Knight, but the team’s PAT sailed wide, leaving the Panthers ahead 7-6.
Later in the first quarter, Yancie connected with wide receiver, Sage Finch, on a 27-yard touchdown pass to give the Panthers another six points. Vargas once again split the uprights to widen the gap to 14-6.
The Panthers then forced a fumble on Shaw’s next possession, giving Yancie the chance to fire off a five-yard pass to Anthony Payne, who brought it down in the end zone. Another accurate PAT from Vargas put ASHS up 21-6.
On Shaw’s return drive, Knight followed a 35-yard run with another 14-yard keeper that landed him in the end zone. The Raiders opted to go for a two-point conversion that was broken up by ASHS’ Eric Brown to hold the score to 21-12.
When the Panthers received the ball back, Kobe Lewis put the Panthers in scoring territory with a 35-yard run that ended at the Panthers’ two yard-line. Yancie then ran it in before Vargas missed his first PAT attempt of the game, holding the Panthers’ lead to 27-12 with around seven minutes left in the half.
The Raiders wasted no time scoring on the return, however, with receiver, Nick Beason, returning the kickoff 75 yards for another touchdown. Shaw’s Elijah Phillips then made a successful two-point conversion run to bring the score to 27-20.
On the Panthers’ return drive, a long Yancie pass was picked off by the Raiders’ Jalen Jackson, plowed his way to the 32-yard line. Knight then made a 28-yard dash to put Shaw in the red zone. A six-yard pass found Beasom in the end-zone and Shaw’s Gio Galvin then split the uprights to tie the game with four minutes left in the half.
On the Panthers’ return drive, Shaw held the team out of the end zone, but left them in position for Vargas to nail a 30-yard field goal, giving the Panthers a 30-27 advantage.
As Shaw drove back down the field, ASHS’ Darion Tyson forced a fumble from Shaw running back, Cameron Pauldin, that the Panthers recovered. Yancie then connected with Tyson on a thirty-yard pass into the end zone, putting the home team ahead 37-27, where the score would stay until half time.
Two minutes into the second half of play, Knight tossed a shuffle pass to Beasom, who took off for a 35-yard touchdown run. Galvan’s kick was good, narrowing Shaw’s deficit to 37-34.
The Panthers capped off their return drive with a 16-yard touchdown pass to Daveon Johnson. Vargas, again, expertly split the uprights to put the Panthers up 44-34.
Rodney Clark ran a 40-yard punt return for Shaw to put them in scoring range. Knight connected with Paulding on a 30-yard touchdown pass on the next play and Galvan nailed another PAT to narrow the gap to 44-41.
After a couple of hard runs that landed the Panthers at their opponents’ one yard line, Yancie broke the plane on a keeper one minute into the third quarter. Another precise PAT kick gave the Panthers a 51-41 advantage.
The Panthers struck again with 8:30 left in the match when Yancie connected on a 19-yard pass to Johnson in the end zone. Another spot-on point after kick widened the Panthers’ lead to 58-41.
One minute later, the Raiders hit it big with a 45-yard reception by wide receiver, Rodney Clark, who took off for the end zone. This play was followed by a successful two-point conversion run by Beasom, shrinking Shaw’s deficit to 58-49.
The Panthers highlighted their next drive with a 42-yard run by Lewis that ended at Shaw’s three yard-line. On third and goal, Yancie barreled through the Shaw defense for another touchdown, putting the Panthers ahead 64-49. Another PAT from Vargas left the Panthers up 65-49, where the score would stay until the buzzer, giving the Panthers their first win of the season.
ASHS opens region play on Sept. 11, facing the Thomas County Central Yellowjackets in Americus. Despite traveling with 19 returning seniors, the Yellowjackets are a fairly young team with many underclassmen on the roster.
Last season, the Yellowjackets took a 20-12 win over the Panthers, and spectators can be certain that the Americus team will be rigorously preparing to turn the tide of this year’s match in the Panthers’ favor.
The Panthers will continue region play on Sept. 18, making the trip to Albany High School to take on the Indians.