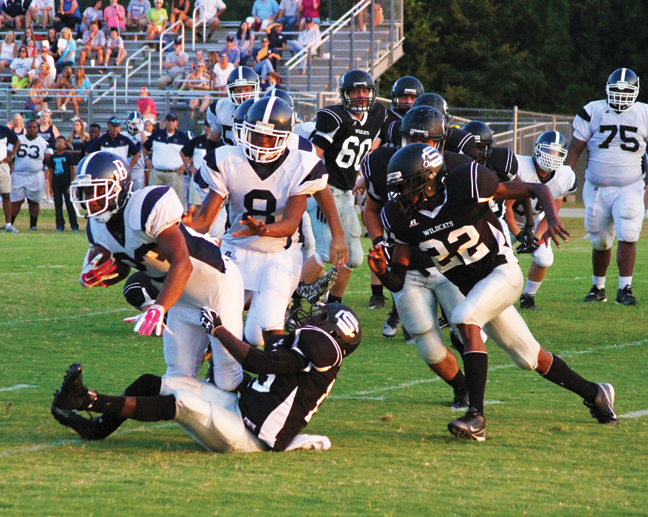 Dartavious Napper (22) rushed to the aid of Calvin Sims (13) as he attempts to take down a Baconton Charter running back in the first quarter of the Wildcats’ season opener on Sept. 4.

ELLAVILLE – The Schley County Wildcats football team hit the gridiron on Sept. 4 to open the school’s season with a battle against the Baconton Charter School Blazers. The Despite a strong performance from the Ellaville crew, the Wildcats suffered a 21-7 defeat at the hands of the Blazers.
The Wildcats burst onto the field filled with confidence in the season curtain-opener, eager to prove themselves early as a force to be reckoned with against Class A challengers. The Wildcats had previously dealt a 44-21 defeat to the Blazers in the team’s 2014 season opener.
The Blazers entered this contest with an 0-3 season record.
Schley quarterback, Christian Corbett, started out the game with a long 43-yard touchdown pass to Calvin Sims after which, Jesse Wilson made the P.A.T. to give the wildcats an early 7 point lead.
The score would stay that way until a blocked punt by Baconton Charter late in the second quarter led to an 18 yard touchdown run by the Blazers’  Narocis Lewis.
In a game full of turnovers, Schley seemed to have difficulty capitalizing on a couple of key plays that could have turned the tide of the match.
Baconton scored once on a turnover in the third quarter, and blocked two Wildcat punts in the game. The final points were scored on a three-yard touchdown rush by Baconton Charter with nine minutes left in the fourth quarter.
When the Wildcats return to the field, the boys will summon up their skill and determination before opening region play against the Greenville Patriots on Sept. 11 in Greenville. The Wildcats are 2-3 in the team’s last five contests against the Patriots and will be looking to equalize the record upon beginning conference play.
Schley’s boys will then return to Ellaville on Sept. 18 to continue region competition against the Taylor County Vikings.