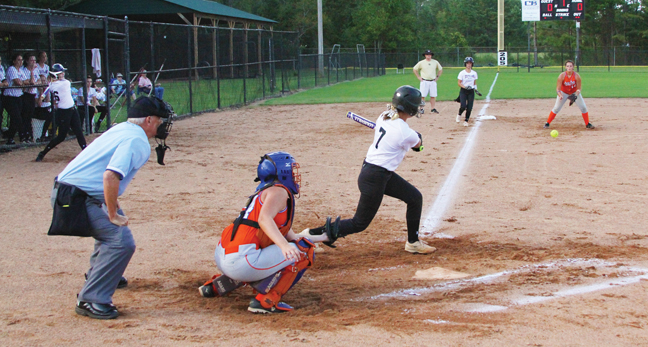 Abby Dent knocks a grounder towards left field in the bottom of the third inning of the Lady Raiders’ Sept. 9 match against the Westwood Lady Wildcats. Dent contributed two RBIs to the Southland victory.

AMERICUS – As any athlete or sports fan knows, when your team is on fire, you’re on top of the world. On the flip side of that coin, when the team is on tilt, the results can be disastrous. Southland Academy’s Lady Raiders softball team can certainly attest to this as they got to experience the excitement of a huge game-ending rally on Sept. 9 in Americus against the Westwood Lady Wildcats.
The Lady Raiders rode cloud nine to a 13-1 fourth-inning walk-off win in the match against the visiting region 3-IAAA foes, who made a series of costly errors late in the game that helped propel the Southland’s girls into the winner’s circle. 12 Southland runners crossed the plate in the bottom of the inning to cinch the school’s victory.
The win boosts the Lady Raiders’ overall record to 6-2, while their undefeated region streak remains intact after six contests.
The game, which was originally scheduled to take place the previous afternoon, was postponed once due to inclement weather. After another small thunderstorm threatened to shut the game down again on Sept. 9, both teams were champing at the bit to get the action underway once the referees cleared the players to take the field.
The Lady Raiders got a strong start in the match as pitcher, Megan Burke, quickly struck out Westwood’s first two batters. Burke then proceeded to walk one batter and give up a single hit before whizzing strikes past Westwood’s fifth girl at the plate to bring the Southland girls into the dugout.
From the field, the Lady Wildcats’ defense responded in kind, walking one of the Lady Raiders’ prospective runners, and grabbing three fast outs at first base.
The Lady Raiders kept Westwood’s runners from crossing the plate once more in the bottom of the second, with Burke adding another strikeout to her stats and giving up one hit.
Back at the plate, Southland’s Hannah Philpot and Kaitlyn Smith opened the bottom of the second by drawing a pair of walks. Philpot managed to steal both second and third before Burke nailed a grounder to bring her in and put the first run on the board for the Southland girls.
The score would not change until the top of the fourth inning, when a Lady Wildcat runner crossed the plate to equalize the score.
The real action started when Southland’s crew returned to bat, with Smith nailing a hard drive into centerfield for a single, followed by Burke racking up a full count before finding the same gap that Smith had exploited. Olivia Perry was then plunked by an errant pitch to load the bases, giving Brittney Tyler the opportunity to draw a walk that pushed Kara Hubbard (pinch-running for Smith) to home plate and gave the Lady Raiders a 2-1 advantage.
Brandi Sellars then picked up her bat but, before she was able to get a hit, she took off to first base on a catcher error while Mary Martin Sheely (pinch-running for Burke) brought it on home for another Southland run.
With the bases still loaded, Savanna Swann took one for the team, being hit by a pitch that pushed in another run for the Lady Raiders. Southland’s luck continued as Christina Davis grabbed another bases-loaded walk to bring in one more runner, putting the Lady Raiders up 5-1.
Southland heavy-hitter, Abby Dent, then brought in the second and third earned runs of the game for the Lady Raiders with a powerful shot deep into right field that allowed Sellars and Swann to come in, widening the gap to 7-1.
After Olivia Payne (pinch running for Dent) managed to steal second, Philpot hit a hard gounder and was put out at first, giving the Lady Raiders their first out of the frame. As this was happening, Davis came on home to put the Southland crew up 8-1.
Smith and Burke then gave the Lady Wildcats a taste of deja-vu, once again nailing back-to-back shots deep into centerfield. Smith’s powerful smash netted her a double and brought in Payne before Burke’s nearly identical shot allowed Smith to come home, leaving Westwood in a nine-point hole with only one out.
Sheely (pinch-running for Burke) then stole second and Perry kept the momentum going on her next at-bat with a hard double to centerfield. Sheely came in on the play, putting the Southland girls in range of a walk-off win and Perry promptly proceeded to steal third as Tyler stepped up to the plate to draw a walk.
Tyler stole a base, leaving runners on second and third when Sellars picked up her bat. Unwillig to settle for a walk this time around, Sellars drilled a hard grounder that hugged the third-base line and allowed Perry and Tyler to score the game’s final runs. As soon as Tyler’s foot touched the plate, the referee called the game and the Southland girls logged another blowout victory in the record books.
Burke pitched all four inings, gaining five strikeouts. Westwood’s pitcher managed to strike out only two Southland batters.
The Lady Raiders drew six walks in the match and logged eight hits.
Smith and Burke each gained two hits, while the others were contributed by Davis, Dent, Sellars, and Perry. Dent, Sellars, and Burke each batted in two RBIS, while Philpot, Smith, and Perry each contributed one.
The Lady Raiders were scheduled to battle the Terrell Academy ady Eagles the next afternoon, on Sept. 10, but the game was postponed until Sept. 21 due to inclement weather.
The Lady Raiders return to region 3-IAAA action in Albany on Sept. 15, facing the Deerfield-Windsor Lady Knights. This will be the teams’ first meeting this season since a scheduled early season match was rained out on August 20.
The Lady Raiders then travel to Macon on Sept. 16 to face non-region opponents, the Windsor Academy Lady Knights, on their home field. The team dealt a 10-1 defeat to the Lady Knights last season and will certainly be striving for a repeat performance this 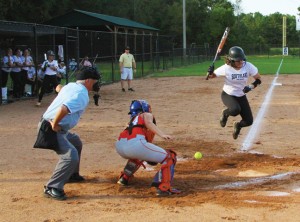 Christina Davis takes a leap to avoid being hit by a wild pitch in the first inning of the Lady Raiders’ match against the Westwood Lady Wildcats.