Panthers setback by Yellowjackets 47-29 in Americus 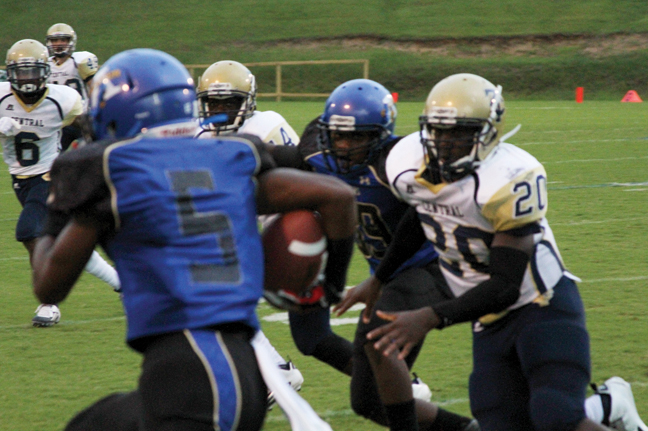 Kobe Lewis takes off with the ball in the first quarter of the ASHS Panthers’ Sept. 11 match against the Thomas County Central Yellowjackets.

AMERICUS – The Americus-Sumter Panthers geared up to return to the gridiron last night and open this season’s region play, facing Class AAAA foes, the Thomas County Central (TCC) Yellow Jackets at Finklea-Robinson Field.
The game got off to a good start for the Panthers with senior quarterback, Mekall Yancie, dishing out several great passes during the opening drive. After junior receiver, Daveon Johnson, hauled down a six-yard bullet (while getting his helmet knocked off in the process), junior kicker Tony Vargas capped off the drive with a 25-yard field goal to put the Panthers up 3-0.
However, TCC immediately responded with their own impressive drive, collecting a touchdown on quarterback Kelias Williams’s 14-yard pass to tight end Noah Harnevious. After a Panthers three-and-out, TCC scored their next touchdown on a 50-yard run from junior running back Tyrice Cloud.
The play was marred by some controversy as it appeared one of the refs inadvertently blew a whistle that distracted the defenders, allowing Cloud to break away into the endzone, practically unscathed.
Things began to look up for the Panthers during the end of the first quarter though, after junior Eric Brown picked off a pass from the Yellow Jackets’ quarterback. The exciting play led to another great touchdown pass from Yancie, this one a 25-yarder to Daveon Johnson that made it a 14-10 game.
However, the Yellow Jackets’ gritty ground attack proceeded to take over, an attack the Panthers struggled to contain all night. TCC running back, Tyrice Cloud, collected several five-yard and ten-yard carries before capping off their next drive with a 3-yard touchdown run, extending their lead to 21-10.
The Panthers followed with a promising start that quickly derailed after an unfortunate fumble was recovered by TCC. Nonetheless, the Panthers exhibited their own resiliency and toughness by keeping the furious Yellow Jackets out of the end zone.Such a strong defensive effort was led by senior defensive lineman Tyler Clark, who scored a couple of highlight-reel hits against the TCC offense. At halftime, the score was 21-10, and the Panthers were still very much in the game.
At the start of the second half, Tyrice Cloud (again) capped off another drive, this time with a 5-yard touchdown run. After an Americus-Sumter 3-and-out, TCC defender Earnest Mccormick blocked a punt and returned it to the end zone to make it a 34-10 lead. Yes, it was one of those kind of games for the Panthers where almost nothing went right.
With a combination of bad luck and sloppy penalties, the Panthers still recovered during the subsequent drive with Yancie completing a beautiful 30-yard pass to sophomore receiver Braylen Williams. After several great runs by Eric Brown, the Panthers were facing a tough fourth-and-goal situation at about ten yards out. Yancie took the snap before immediately flicking it back to sophomore Anthony Payne, who proceed to toss a perfect throw to Yancie for an exciting touchdown pass. The unusual play brought both the crowd and team back as it sliced into the deficit, making it a 34-17 game.
On the following TCC drive, sophomore cornerback, Kobe Lewis, picked off a TCC pass, and the Panthers were back in business with excellent field position. However, just as a miraculous Panthers comeback was coming to fruition, another costly fumble snapped the momentum and allowed TCC to regain control. From there, the Yellow Jackets strung together a collection of hard-nosed runs before quarterback Williams dashed into the endzone for a 14-yard scramble, making it 40-17.
Once again, the Panthers showed great resiliency and mental toughness with their next possession. After an outstanding 35-yard pass from Yancey to Williams, Eric Brown completed a spectacular 25-yard touchdown run to make it a 40-23 score. TCC answered back on their next drive though as senior running back Nick Patterson rammed into the endzone on a 13-yard run, effectively putting the game out of reach at 47-23.
On their final possession, the Panthers still gave it their all even with time winding down. After a pair of great Eric Brown runs, Yancie threw a 30-yard bomb to sophomore Sage Finch. This set up another highlight play for the Panthers’ offense as Yancie completed a 28-yard touchdown pass to Braylen Williams, who made an outstanding leaping grab.
Overall, the Panthers showed great poise and continued fighting even as the score got out-of-hand against an extremely physical TCC team. Look for the Panthers to build off of this effort as they return to action on the road Sept. 18 to take on region rivals, the Albany High School Indians. The Panthers have defeated the Indians in each of the schools’ last three meetings, most recently with a narrow 27-26 win in last season’s competition.