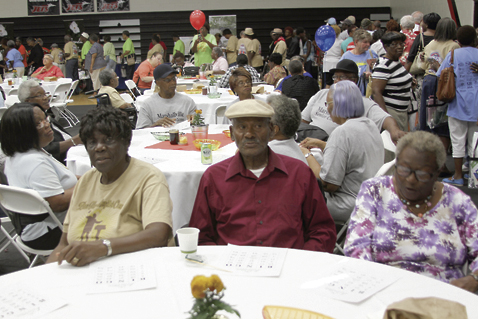 AMERICUS — Innovative Senior Solutions (ISS) really puts on a show when it hosts its annual Senior Fall Festival, and this year, the fifth annual, was no exception.
Some 350 senior participants, along with vendors and volunteers, swelled the crowd inside The Hangar at South Georgia Technical College to 460 on Wednesday. Jessica Wright, co-owner and co-founder of ISS along with her sister Eshonda Blue, said this was the largest crowd so far.
People were lined up all the way around the perimeter of the gym  as they visited the vendors’ tables to collect information and samples, etc. Many were seated around the colorfully decorated tables chatting and catching up with old friends and meeting new ones as they enjoyed funnel cake.
There was a stage show featuring the Denim Daisies dance ensemble from the Buena Vista Senior Citizens Center. Sumter County Sheriff’s Chief Deputy Col. Eric Bryant served as emcee. Other performers were Jim and Shades and the GSW Jazz Band.
Lunch was served after which door prizes were awarded.
Doris Briggs of Americus said this is the second fall festival she’s attended. When asked what she likes about the event, she said, “There’s a whole of information, and I can talk to folks I haven’t seen in a while.” Seated with Briggs was Barbara Williams of Americus, who said she brought her mother, Annie Nelson who said she enjoys mingling. “I love people and I like to talk,” adding that she’s been coming to the event every year.
Mary Jackson of Americus said she likes “everything about it,” while May Frances Merritt of Plains said she enjoys the event because it’s fun and she gets to meet new people. “I look forward to it every year,” she said, and her husband James Merritt, seated next to her, concurred.
Sherill House of Americus was seated at a table with her neighbor Chuck Craig while Craig’s wife visited the vendors. House said the event is always fun.
Charles and Mr. Cecil from the Albany ADH were accompanied by Jaunice. Mr. Cecil commented that he was really enjoying himself “singing all the old songs you used to hear on the radio.”
There were seniors from other areas as well such as Ellaville, Marshallville, Cordele and Koinonia, among others.
This year’s sponsors were Cordelia Manor, MRS Homecare, People’s Bank, Citizens Bank, Doctor’s Pharmacy, Parker’s Heating and Air, Phoebe Sumter Medical Center, Friendship Baptist Church, Magnolia Manor and Gentiva Hospice.
Vendors at the event were Americus Fire & Rescue, Lee County Health and Rehab, Doctor’s Hospital, Sumter County Sheriff’s  Office, Alzheimer’s Association Amicita/Affinis, Magnolia Manor, Lillian Carter Health & Rehab, Middle Flint Behavioral Health Care – HIV, Rosalynn Carter Institute, River Valley Area Agency on Aging, Sumter County Health Department, MRS Homecare, Senior Resource Center, Gentiva Hospice and Ombudsman.
Those donating gifts as door prizes were The Kinnebrew Co.,  Giggles Frozen Yogurt, Café Campesino, South Georgia Technical College, Madea’s Diner and Bakery, Middle Flint Council on Aging (use of funnel cake cooker), Wayne’s Electric for cooking funnel cakes, Burger King, McDonald’s, Zaxby’s, Waffle House, Harveys, Chandler Morgan Eyeworks, Ginger Starlin State Farm Insurance and William Baily State Farm Insurance. 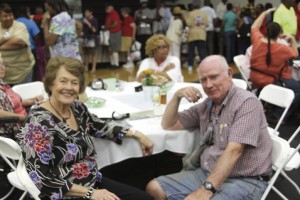 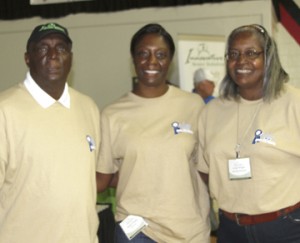 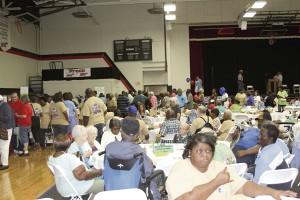 The Hangar at South Georgia Technical College was filled with people gathering information from vendors or enjoying funnel cake at tables and chatting with friends, new and old. 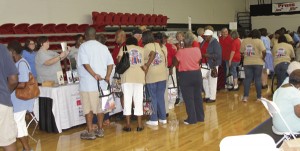 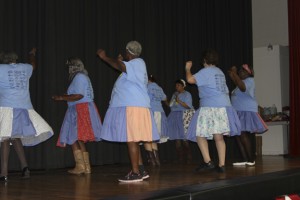 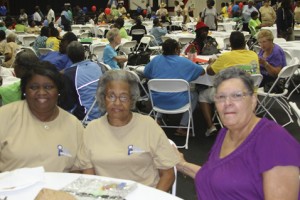 Barbara Williams, at left, brought her mother Annie Nelson, center, of Americus to the Senior Fall Festival. Shown at right is Doris Briggs, also of Americus. 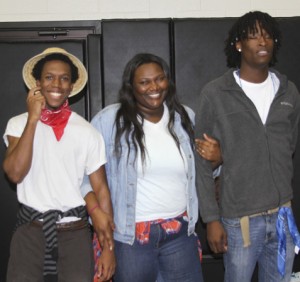 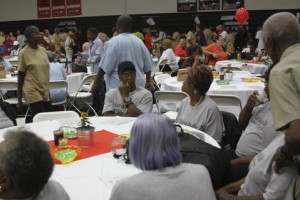 Seniors from the Marshallville Senior Center traveled to Americus for the event. 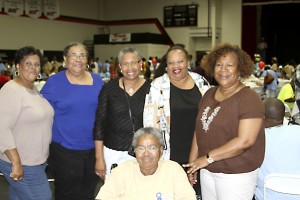 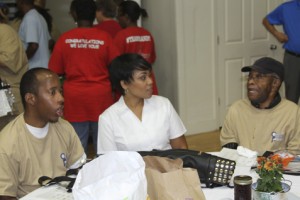 From left are Charles, Jaunice and Mr. Cecil from Albany ADH. 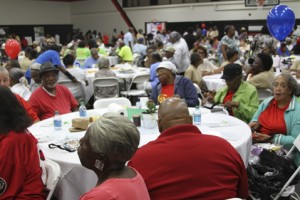 Members of the Ellaville Senior Citizens Center enjoyed the event. 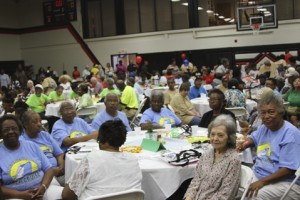 Several senior women from the Koinonia community were in attendance. 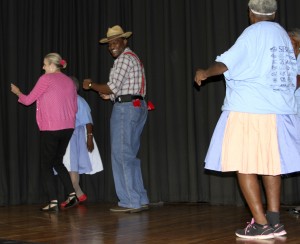