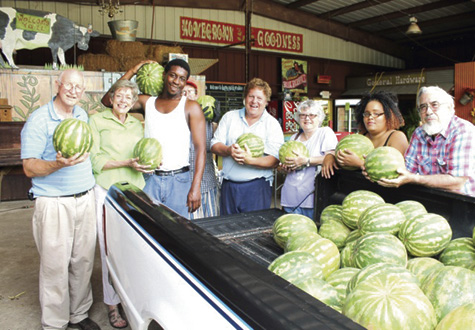 A member of ‘Honor-Release-Return’ greets the former POWs and MIA family members prior to 2014 ‘The Ride Home’ ceremonies.

AMERICUS — National Prisoner of War/Missing in Action (POW/MIA) Recognition Day is Friday, Sept. 18. According to historical data, over 18,800 Georgians have been held as prisoners of war (POW), with more than 2,630 having died in captivity and over 1,400 still unaccounted for, dating back to the Revolutionary War. In their honor, Georgia Southwestern State University is helping host “The Ride Home” again this year.
The Ride Home began in 2002, and has become the nation’s premier annual event to honor America’s former POWs and the families of those still missing in action (MIA). Prior to services on Friday and Saturday members of Honor-Release-Return Inc. — an extension of The Ride Home — will escort former POWs and MIA families in grand fashion on motorcycles and other vehicles decorated in patriotic fashion.
The 2015 National POW/MIA Convocation started the week’s festivities. The featured speaker was Brig. Gen. Rhonda Cornum, U.S. Army (retired), former POW during the Gulf War.
The public is invited and encouraged to attend the events at Georgia Southwestern associated with “The Ride Home” 2015. The featured events are listed here:
Friday, Sept. 18
• Opening Ceremony – Convocation Hall, GSW – 4:30 p.m.
• Keeping the Promise … We Will Not Forget Service – Convocation Hall, GSW – 5:45 p.m.
• Candlelight Service (inside) – Convocation Hall, GSW – 6:45 p.m.

For a complete schedule of events (i.e. ceremonies Andersonville National Historic Site, Robins Air Force Base, and others) , go to https://gsw.edu/Assets/News/files/RIDE_HOME_2015_Itinerary.pdf