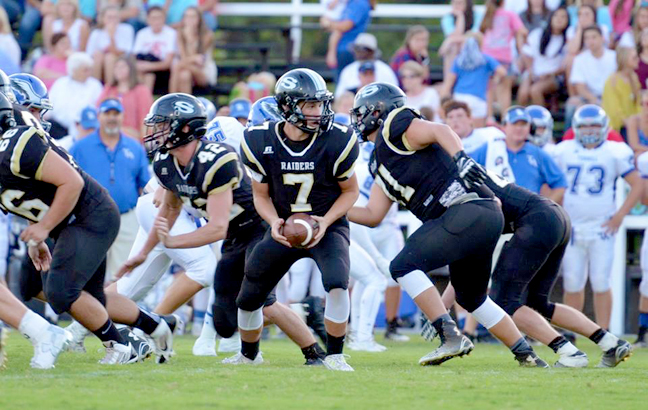 Photo by Dawn Shattles: Raider quarterback, Alex Roach, prepares for a handoff in the first half of Southland's homecoming match against Terrell Academy.

AMERICUS – After a thrilling comeback victory against the SGA Warriors last week, the Southland Raiders were back in action on Sept. 18 for a match-up against the Terrell Academy Eagles.
In front of a large crowd at Harvey Simpson field, the Raiders got off to a hot start for their homecoming game. After a great kick-off return, the Raiders put points on the board quickly with a tough drive that junior RB Stephen Turton finished off with a one-yard touchdown run. Southland’s fast offensive start was matched by their defense as junior Stephen Taggart forced a fumble that junior Jamal Rice returned 52 yards for Southland’s second touchdown of the game.
The Eagles recovered from the 14-0 deficit on their very next possession.  Junior quarterback Andrew White followed a 28-yard run with a one-yard touchdown run that made it a 14-7 game.  On the following Southland possession, Eagle defensive, tackle Tripp Lynch, forced a fumble before returning it all the way to the Southland 3. White then connected with a wide-open Christian Harris for a five-yard TD pass, tying the game at 14-14.
In the second quarter, both teams’ defenses tightened up. Southland’s defense (anchored by great showings from Josiah Copeland, Josh McKie, and Houston Hawkins) held strong throughout the quarter, only giving up a 28-yard field goal from Terrell’s freshman kicker, Jenna Cuff. The Raiders’ defense also capitalized on Terrell’s bad snaps by tackling Andrew White in the Terrell endzone for a safety, making it a 17-16 Terrell lead going into halftime.
Such strong defense continued into the third quarter with both teams trading three-and-outs until Terrell’s Cuff connected on another field goal, this one a 22-yarder that gave them a 20-16 lead heading into the fourth quarter.  After getting behind 26-16 with about three minutes left in the game, this young Southland squad showed great poise as they attempted another comeback. Sophomore quarterback, Alex Roach, really turned it on, connecting with receivers for 20-yard, 10-yard, and 25-yard throws before flinging a 25-yard touchdown pass to Rice.
With about one minute left, the Raiders tried an onside kick that was barely recovered by Terrell, sealing this 26-23 win for the Eagles.
While such a loss marred Southland’s homecoming, the Raiders should still be proud of the way they handled the adversity. After a terrific win last week, Southland came very close to notching successive comeback victories. Look for the Raiders to rebound from this hard-fought loss as they go on the road on Sept. 25 to take on Brookwood High. 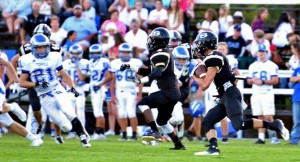 Southland’s Jamaal Rice blocks for Townsend Ray in the Raiders’ homecoming match against the Eagles in Americus.