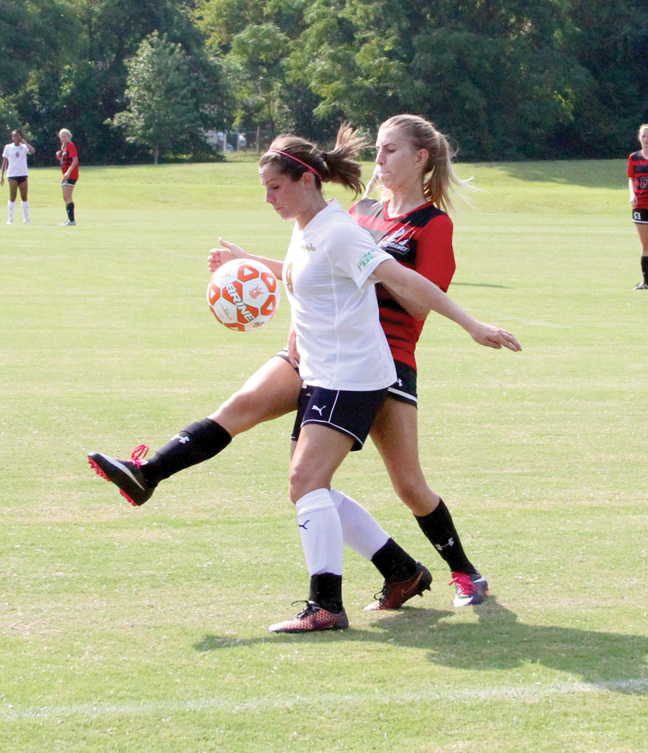 Michael Murray/Americus Times-Recorder: Americus native, Ella Hawkins (9), vies for control of the ball with a LaGrange player in a Sept. 5 match. Hawkins, an Americus native, scored her first collegiate goal in the Lady ‘Canes’ Sept. 19 match against Lander University. 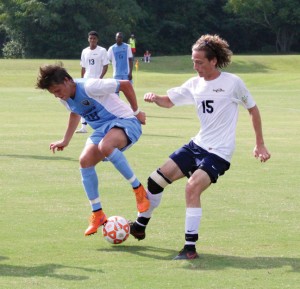 Michael Murray/Americus times-Recorder: Chris Steinwachs (15) attempts a steal from a Point University competitor in a Sept. 3 match in Americus. Steinwachs took the ‘Canes’ only shot on the goal during GSW’s Sept. 19 match against Lander University.

AMERICUS – The Georgia Southwestern women’s soccer team (2-4, 0-2 PBC) faced Lander University (3-0, 1-0 PBC) on Sept. 19 at Hurricane Field for their second conference game this season.
Freshman Ella Hawkins, an Americus native, scored the only goal of the match, a feat which marked her first collegiate goal.
The Bearcats were quick to put the first point on the scoreboard scoring 6:16 into the game. GSW’s defense and offensive proved to be a match for Lander in the first half. The Lady ‘Canes had eight shots in the first, four being on goal. Hawkins took a shot early on which was saved. Neeli Fortson got close, but her shot was saved and Kenesha Roberts had a header that was saved.
Hawkins’ second shot on goal came after she had a two-on-one breakaway and sped around a Lander player to boot the ball into the back of the net with less than three minutes left in the first half.
The Lady ‘Canes were able to hold off the Bearcats up until the last ten seconds of the first half, when they scored their second goal to take the 2-1 lead going into the second period.
Lander scored four more in the second half to secure a 6-1 victory.
Emily Jones started as keeper for GSW and recorded five saves on goal, allowing only two goals. Elyse Gowen played the second half and had nine saves, allowing four goals.
The Lady ‘Canes are on the road Saturday Sept. 25 to face Middle Georgia State at 2 p.m.
The Georgia Southwestern men’s soccer team had a rough afternoon at Hurricane Field that same afternoon, dropping a 5-0 Peach Belt Conference decision to Lander University on Sept. 19.
GSW’s record drops to 0-3-2 overall, 0-1-1 in the PBC, while Lander improved its mark to 5-0 and 1-0 in conference play.
The Bearcats got the scoring going early and took a 2-0 lead into the half-time break.
The Hurricanes pressed to quickly cut the lead in half as they sliced through the Lander defense seconds into the second half and got a great look from Chris Steinwachs that bounced off the goalkeeper. The play developed so fast that there were no GSW players in position to punch in the rebound.
Lander proceeded to tack on goals in the 54th, 61st and 72nd minutes to round out the scoring.
GSW goalkeeper Garrett Blamire turned away eight shots in 58 minutes of action before exiting the game with a cut over his right eye. Joshua Swift made three saves and allowed a pair of Lander scores over the final 32 minutes.
The Hurricanes return to the pitch on Wednesday to host Concordia College (Ala.) at 3:30 p.m. in a non-conference match.