Facing Marion, Wildcats will need to bring all of their talents to the field 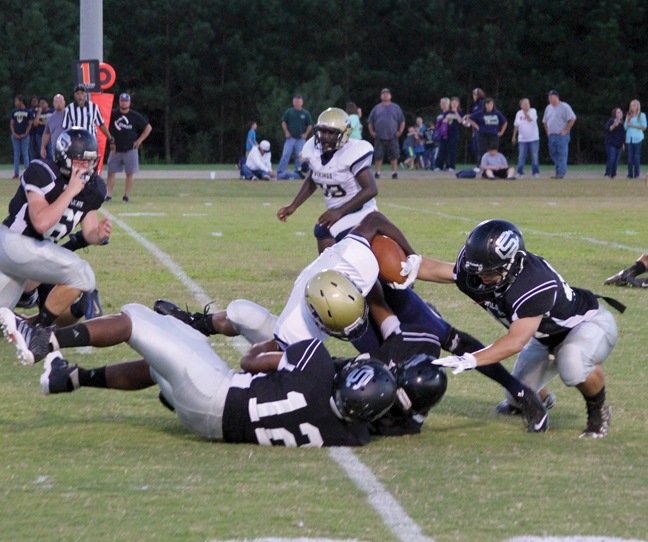 William Hand/Americus Times-Recorder: Demarco Cross (12) and another Wildcat defender take down a Taylor County runner in the team’s Sept. 18 match in Ellaville.

Schley County’s Wildcats are currently gearing up for one of the team’s most competitive region matches of the season against the Marion County Eagles. The two teams have been engaged in one of Schley’s oldest rivalries for nearly as long as the schools have been competing on the gridiron, and will be returning to the field to duke it out once more on Sept. 25.
The Wildcats, with a very young team, have had several tough outings on the gridiron so far this season and will certainly be looking to capitalize on the talents of several of the team’s major players in the region 4-A match.
In last week’s contest against Taylor County, the potential of many of Schley’s players on both sides of the ball was put on full view of the crowd despite the team suffering a hard loss. With sophomore, Alec Harris, stepping up to score both of the team’s touchdowns and pick up 78 yards on 24 carries, he showed himself to be a consistent ground-gainer for the team when they need a few yards to get the first down.
This sort of reliability could make a huge difference when playing against a team with a defensive line as tough as Marion’s.
Calvin Sims, who got 65 yards on eight attempts in last Friday’s match, will certainly come in handy on the Marion County field, as the team will need a reliable running back to help them avoid getting into sticky situations against the Eagles. Sims was, unfortunately, injured slightly in the second half of last week’s match, sitting out much of the final quarter. Whether or not his participation in this week’s contest will be hindered by the injury is uncertain. What is certain, though, is that his speed and agility will be sorely missed if he is deemed unable to fully participate.
Freshman Dartavious Napper’s chops will also be put to the test in this rivalry match. Napper handled kickoff return duties for the Wildcats last week, tacking on 84 yards to the team’s stats and running an interception back for another 52 yards, making him one of many players that will likely be a thorn in the side of the eagles in Friday’s match.
Facing an Eagle defensive line with such accomplished tacklers as Marion’s Hayden Gray, Jamon Tymes, Ellison Kabron, and Maurice Carter, the Wildcats will need every ounce of their offensive players’ skill that they can muster to break through the lines and gain yardage.
No matter how hard a team’s offense works, however, they can’t do much without good field position. In this respect, Schley’s defenders will see the opportunity to shine in Friday’s game.
Napper presents a double threat, as he excelled last week on the other side of the ball as well, contributing three solo tackles and two assists to the Schley cause. He is joined in this by junior Demarco Cross, senior Corey Tanner, and freshman Richard Quiroz, each contributing three solo tackles. Junior Jake Hall and sophomore Derric Tatum each brought down two Viking runners last week.
With the Marion County team loaded with talented, experienced offensive players like Lorenzo Smothers and Mykelle Kelley, the Wildcats will need every tackle they can get to hold off the Eagles’ hard-nosed offense.