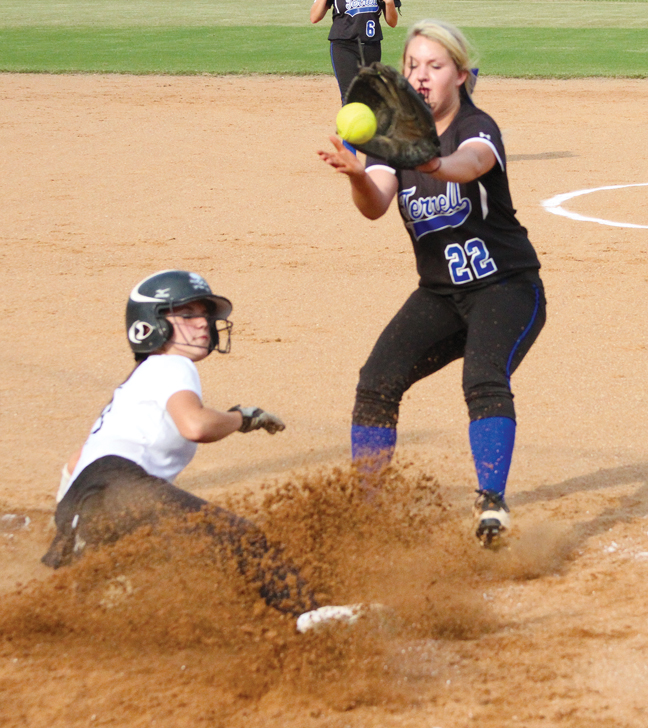 Savanna Swann slides into home plate in the second inning of the Lady Raiders’ Sept. 21 match against Terrell Academy.

The Southland Academy Lady Raiders have had busy time on the diamond, traveling to Albany on Sept. 15 to face the Deerfield-Windsor Lady Knights before heading to Macon the next afternoon to battle the Windsor Academy team of the same name. On Sept. 21, Southland’s girls returned to their home field to face the Terrell Academy Lady Eagles in a match that had been postponed earlier in the season.
Southland’s girls took an 8-0 win over Deerfield’s region 3-IAAA squad in the first match of the outing. The team didn’t fare so well against non-region foes, Windsor Academy, taking a 7-0 loss in the match. When Lady Raiders returned to Americus the next Monday to face Terrell Academy, they brought all of their skills to their home field, grabbing an 8-0 walk-off win over the Lady Eagles.
At the conclusion of the series of contests, the Lady Raiders hold onto an 8-3 overall record, while the team’s region record stands firm at 8-0.
Southland’s girls came out swinging in the Sept. 15 match-up, posting three runs in the top of the first inning to build an early cushion over Deerfield. Another three runs in the top of the second added a little more depth to the pad. The Lady Raiders added one more in both the third and fourth innings, all the while stubbornly preventing Deerfield’s runners from crossing the plate.
The game was called at the conclusion of the fifth inning, giving Southland’s girls their seventh region win of the season.
Abby Dent paced the Lady Raiders’ offense in the match, gaining a pair of hits and knocking in three RBIs. Christina Davis, Brandi Sellars, and Savanna Swann each gained one hit, while Davis and Swann brought two runners home apiece.
Megan Burke pitched the winning game, throwing five strikeouts and giving up only one hit during her work on the mound.
The Lady Raiders gained a total of six hits in the contest.
Southland’s girls ran into some difficulties in the non-region match on Sept. 16, while Windsor’s Lady Knights seem to have been at the top of their game.
Windsor’s girls posted one run in the bottom of the first inning to gain a slight lead before tacking on another point in the bottom of the fifth. A hard defensive push in the sixth prevented the Lady Raiders from answering and the Lady Vikings caught fire upon returning to the dugout. In the top of the sixth, Windsor got a rally going that netted the team five more runs to put the game out of comeback range for the Lady Raiders.
The Lady Raiders logged six hits in the match, while Windsor logged seven.
Southland’s team returned to action on Sept. 21, taking on the Terrell Academy Lady Eagles for their eighth region match of the season.
Southland came out quick in the match, grabbing two quick runs early in the bottom of the first. With Hannah Philpot on third base and Kaitlyn Smith on second, Brittney Tyler stepped up to the plate to knock a long drive deep into centerfield. The ball was caught, but the hit gave Philpot the opportunity to come home, adding another run for Southland. Next up to bat came Olivia Perry, who nailed a grounder to Terrell’s shortstop. The shortstop’s throw missed the first baseman, giving Smith time to add another point and put the Lady Raiders up 4-0 before surrendering the plate.
A pair of strikeouts by Burke and a catch by Cassi Bass made short work of the Lady Eagles’ batters in the next inning, bringing the Lady Raiders back into the dugout post-haste. A bunt and a hit put Swann and Davis on base. The two ladies proceeded to steal their way onto second and third before Dent picked up her bat. With Dent at the plate, a wild pitch led Swann to come sliding in home before she banged a double deep into centerfield, bringing in Davis and putting the Lady Raiders up 6-0.
Hard, persistent defense from both teams kept the game scoreless until Southland returned to bat in the bottom of the fifth. Burke opened the inning, drawing a walk and Tyler caught a lucky break when Terrell’s outfielders collided while going after her fly ball in the left field gap. Kendall Kirkland offered up a sacrifice bunt to push the runners to second and third before Philpot brought Mary Martin Sheely (courtesy running for Burke) across home plate. Sellars stepped up to take the team’s last at-bat, but didn’t even have a chance to swing before another wild pitch sent Tyler barreling home as Terrell’s catcher scrambled to tag her out. Fans on both sides of the stands held their breath expectantly, waiting for the umpire’s call, but the home fans were the ones with a reason to celebrate when he threw his hands out and yelled, “Safe!”, ending the game with another shutout win for Southland.
Burke pitched the winning game for the Lady Raiders, gaining four strikeouts and giving up only one hit.
Dent, again, paced the Lady Raiders’ offense, bringing in three RBIs on two hits. Tyler added an RBI on her only hit of the game. Philpot brought in an RBI as well and Davis gained one hit in the match.
The Lady Raiders traveled to Tifton on Dec. 22 to face the Tiftarea Lady Panthers. The results of this match were not available at press time. Southland will host Brookwood on Sept. 24 for the team’s final region match of the regular season.