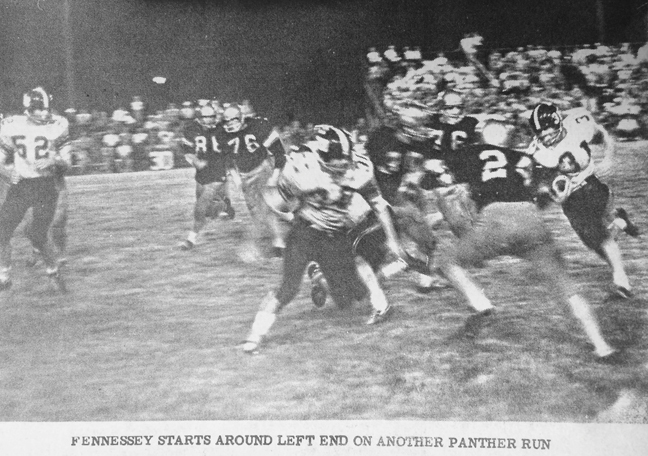 This photo from the Sept. 11, 1965 isse of the Times-Recorder shows Michael Fennessy (3), at right on a carry for the Panthers. 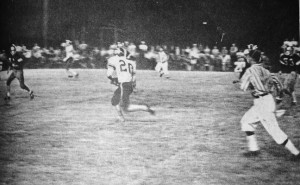 Editor’s Note: Here at the Americus Times-Recorder, we’re very proud of our area’s rich history of sporting excellence. Our readers will remember that we have recently begun to run a series celebrating the 50th anniversary of the Panthers’ 1965 season, in which the team went undefeated, rolling over opponent after opponent on their way to a sweep of the state championship series.
While delving through our back issues and expansive archives, we have uncovered a wealth of photographs and articles written by former Times-Recorder sports editor, the late Clarence Graddick, during that era.
In our last installment of the series, we read about the Panthers’ shutout win over Crisp County and how the team was preparing for their third contest of the season against the Bainbridge Bearcats the following week.
Emblazoned across the front page of the Sept. 11, 1965 edition of the Times-Recorder was the story of yet another Panther victory. Alongside this exciting article were Associated Press articles about Pakistani air raids in India and aquanauts preparing to emerge from the U. S. Navy’s Sealab II underwater habitat.
Also on the front page of the paper was an article about Panther Head Coach, Jimmy Hightower, in which he addressed the local Kiwanis Club and discussed the team’s success so far in the season, giving, “much credit to the community support and encouragement, the types of athletes produced here, and the able personnel in is coaching staff.”
The article went on to describe Hightower’s assertion that, “Boys playing on Americus teams have great personal pride, a fine attitude, and good discipline, declared the coach who has an amazing record of 48 victories, only eight defeats, and three ties during the years he has coached here.”
The Panthers had faced Bainbridge the previous evening, grabbing a 20-0 win. Below, we have shared the late ATR sports editor, Clarence Graddick’s, review of the game.
In our archives, the first column of Graddick’s article on the Panthers’ matchup against the Bearcats is somewhat obscured due to the manner in which the volumes were bound, so the beginning of the article is, necessarily, paraphrased.