Pirtle saves the day for GSW with last-second goal 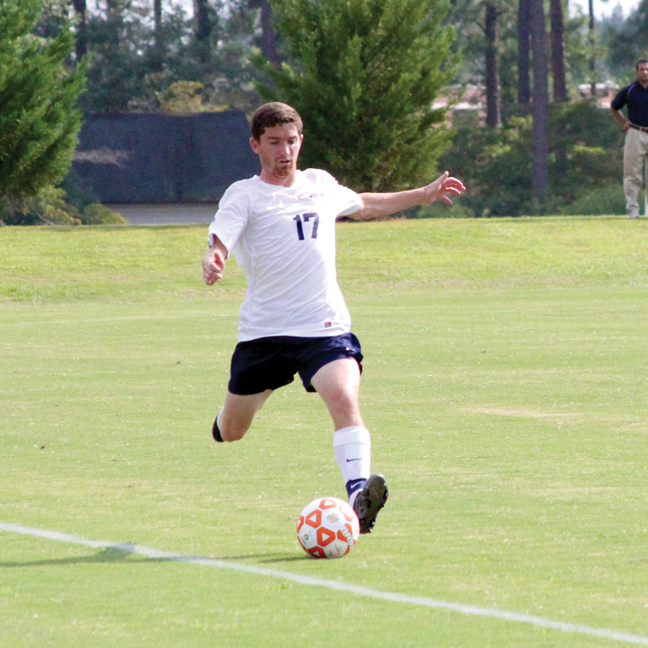 AMERICUS – Georgia Southwestern senior Zack Pirtle scored with six seconds left in overtime to give the Hurricanes a 3-2 non-conference win over Concordia College, Alabama on Sept. 23 at Hurricane Field.
It was the second goal of the afternoon for Pirtle as he sent the match into overtime with his equalizer in the 87th minute.
GSW improved its record to 1-3-2 overall while Concordia had its mark evened at 4-4.
After both sides went scoreless in the first half, Concordia took the initial lead off a goal by Noventure November at the 56:54 mark with the assist coming from Stanley Benjamin. Benjamin added to his stat line in the 70th minute when he found a seam in the GSW defense in the middle of the box and lined a shot over goalkeeper Garrett Blamire.
Trailing 2-0, the Hurricanes quickly went to work. Senior Charlie Curran set up less than a minute after the Benjamin goal and cut the lead in half with his first goal of the season, off a pass from Onorio Molina.
GSW continued to press until Silvio Polly was able to tap a short lead pass to Pirtle for the game-tying goal.
The match seemed destined for another extra session but a pass from Brennan Bauschka in the closing seconds of the first overtime allowed Pirtle to arch a lob shot from the right side over Concordia goalkeeper Thoby Wendy that found its way inside the far post before the final horn.
The Hurricanes finished with 7-4 shots on goal advantage while corner kicks were even at seven apiece.
Wendy saved four shots. Blamire turned away one.
The Hurricanes traveled to Brewton-Parker College on Sept. 26 for a 4 p.m. non-conference match against the Barons. The results of this match were not available at press time.