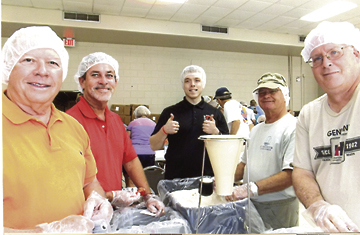 Those of us who live in middle America, or better, talk with our friends about places to shop to buy the freshest food. We want it to be organic. We want the meat to come from animals that have been raised (and slaughtered) in a humane way. We want everything to be local: vegetables, meats, grains, fruits, cheeses. And we want to talk about food with all our friends, and tell them about the latest source we’ve found for a particular cheese or bread or wine. Then we move on to discuss our favorite restaurants.
Those of us who do this are living in a world of privilege. We are also often living in a world of denial. We are far removed from the hunger that is a daily reality for millions of people all over the world. And we often pretend we don’t even know about it. Because if you know about it, you must do something. Which is just what the folks at First United Methodist Church in Americus are doing. According to Terry Duncan, chairman of their Stop Hunger Now project for the past two years, members of the congregation have, for the past four years, joined in support of that organization, founded in 1998, by United Methodist Church Ministries, under the leadership of Ray Buchanan, and headquartered in Raleigh, North Carolina.
Duncan reports that in the past 17 years, over 180 million meals have been given world-wide — to people in 65 countries, where the need is most desperate. Accompanying those meals are medical supplies, as well as clothes and blankets. Over 56 million meals have been shipped to Haiti alone, and this year the organization will package 45 million meals, to be shipped with $9 million in medical supplies and vitamins. First Methodist plays a serious role in this. When they began four years ago, they packaged 10,000 meals; last year they packaged 20,000 and their goal this year was 30,000. Packaging meals involves weighing rice (which arrives in 50-pound bags) and freeze-dried vegetables into sealable plastic containers, which must be weighed to meet their guidelines. Then the containers are packed in cardboard boxes for shipping. Upon arrival at the destination, the packages become a meal by adding warm water (or, in emergency situations, cold water — not as good perhaps, but just as nourishing).
The 30,000 meals were packaged by 120 volunteers  at First United Methodist on Saturday, Sept. 19. The goal was to complete the packaging in two and a half hours, then box it up, put it in trucks that were waiting to take it to Atlanta, from where it will be shipped to places all over the world. From young children to octogenarians, these are serious Christians carrying out a ministry to others, in a party-like atmosphere: music plays in the background and folks dance around and sing (in their hairnets and plastic gloves). The energy, as described by Duncan, is palpable.
The new minister at First United Methodist, Jerry Roe, is an enthusiastic participant, according to Terry Duncan, and couldn’t wait to be a part of the process for the first time. This congregation believes that they are called by God to do this ministry, and they are issuing a challenge to other local  churches to join the effort. Duncan said they were especially pleased with the response from the church’s children. Their minister had asked the children to fill a large money pot, to raise cash for the other gifts they send (medical supplies, etc.). Some brought all they had, emptying their piggy banks into the pot which continued to grow from the children’s efforts.
This time next year, preparations could be underway for the packaging of 50,000, 60,000 meals if enough volunteers respond to this significant call to ministry. It is worth noting that some of the same people who are involved in this outreach effort are also involved in the local Harvest of Hope Food Bank efforts. They understand that food is a universal need, and that children all over the world — from Americus, Georgia to the Balkans, to the Phillipines, to the Middle East, to Africa, need food to survive. Hunger knows no geography, no sex or color, no race. It is the most elemental human need, and one that must be met before a human can begin to be … well, human.
So it is with brave hearts and enormous faith that the people of First United Methodist Church are tackling a world-wide problem, one meal at a time. And they invite any … and all … of us to join them next year.

Joni Woolf, a writer and editor, now lives in Schley County, having moved fro her home in Macon several years ago. Contact her at indigojoni@windstream.net 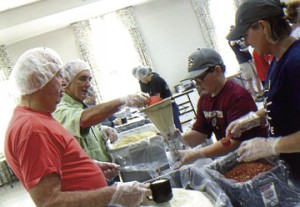 From left are the Rev. Bill Dupree, Phil Guest, Jake DeBarge and Kerry DeBarge working on their part of the meals. 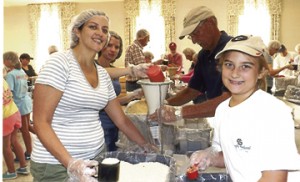 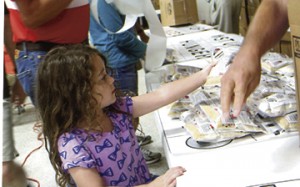 Even the youngest did their part in stopping hunger. 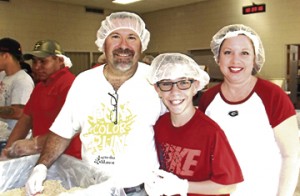 Keith and Andrea Pinckard made it a family affair wiht their son Aaron. 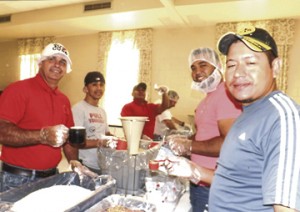 This group of volunteers took time to smile for the camera. 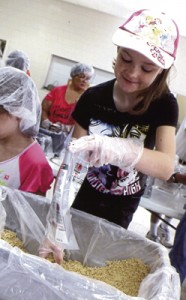 No one was left without some type of chore to join the effort. 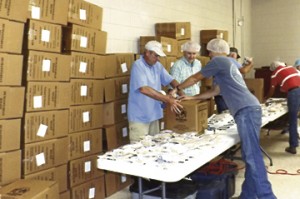 They say it takes a village … 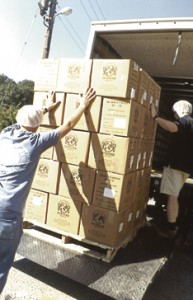 And finally, after all the meals are made and packed, they’re loaded onto a truck to get them to the people who need them.e